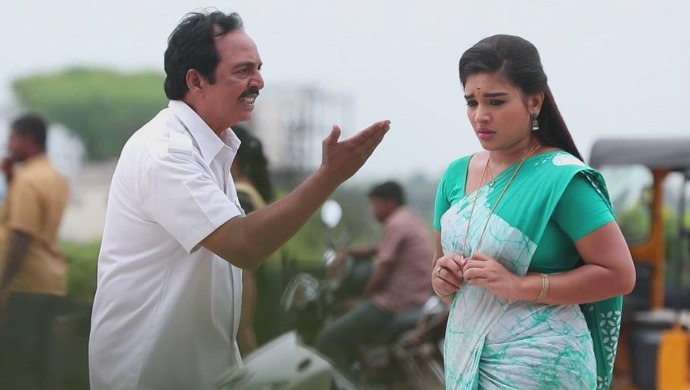 In the previous episode, Sundaram finds out that Purushothaman, Aishwarya and Pattamma are also helping Adithya and Parvathy out. He is shocked to know this and decides to do something about it since Parvathy also refuses to call it off with Adithya. He decides to seek help from another member of the family who he knows might help him out. He also wonders if he should tell Akhilandeshwari about everything that he found out. He is torn between his daughter and his boss, whom he has been loyal to for such a long time.

He tries to explain to her that being suspicious will only cloud her judgement. She tells him that she does not hate Parvathy and she really likes her personally which was one of the reasons that she still let her stay here. Akhila tells him that fate is playing with Adi and Parvathy but she will not let that happen. She leaves and Purushothaman is convinced that he did the right thing by hiding the truth from her.

Sundaram comes home thinking about what Pattamma told him and what Parvathy told him about not breaking up. He suspects that Adithya and Parvathy are more than just lovers. He sees Ganesh studying and figures that he will definitely know everything. He decides to get Ganesh to tell the truth. Ganesh is worried that Sundaram has found out about the marriage. As soon as Sundaram lies down for a nap, Ganesh leaves the room to tell Parvathy that he might be know about it. Sundaram follows him to find out the truth.

At the temple, Parvathy applies some sandalwood to her thaali when a chain-snatcher starts following her. Ganesh reaches the temple but misses her by a second as she leaves. Sundaram overhears a woman screaming for help and sees a man trying to steal a woman’s thaali. He goes to help the woman and beats the man up. Parvathy is shocked to see that it is Sundaram. She turns her back to him and stands. He then asks her if she is okay, unaware of the fact that it is his daughter. He is shocked to find out that it is his own daughter. He breaks down and demands answers from her.

She tells him that Adithya got married to her leaving Sundaram worried about how he will face Akhilandeshwari now. He leaves the place telling her that he will tell Akhila everything right now. Just then, he gets a call from Akhila and tells her that he will see her soon. He tells Parvathy that Akhila is more important to him than her. Parvathy tries to stop him but in vain. To find out what fate has in store for Adi and Parvathy, watch Sembaruthi every night on ZEE5. For more such entertainment, watch Yaaradi Nee Mohini streaming on ZEE5.