Adithya bashes up all the goons of Nandhini. Finally, Adithya hands over a thick piece of log to Akhilandeshwari and asks her to break Nandhini’s leg. 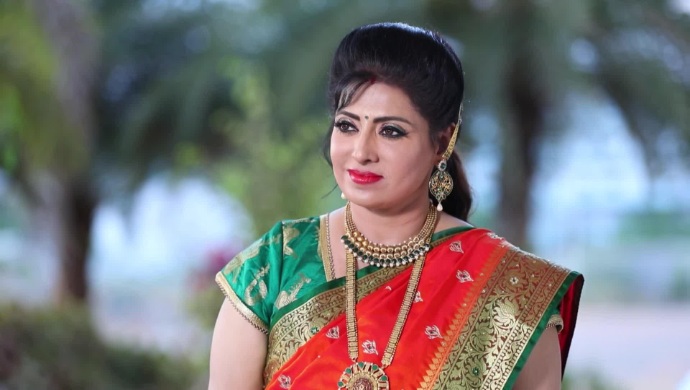 In the last episode of Sembaruthi, we see that Aishwarya gears up to prepare Kesari for Arun. Though he is a bit reluctant to let her do this but finally agrees to it. So, she prepares the Kesari and asks Parvathy to taste it and give her comments. Later, she takes it to Arun, who tries to hide the truth about the taste of the Kesari and praises it. Finally, we see that Parvathy prepares Adithya’s favourite fish curry and feeds it to him with her own hands. At this point, they share a cute and romantic time but soon Parvathy shares her concern about what the old hermit had to tell her at the temple.

In today’s episode of Sembaruthi, we see that Nandhini is making plans with her goons, to hurt Akhilandeshwari and spoil her image.  Later, the goon who is instructed by Nandhini walks to Akhilandeshwari’s office posing as a blind man. He walks closer to her and tries to trip her down the stairs. Later the goon calls Nandhini up and says that all went according to the plan. Nandhini is happy to hear this but soon this happiness turns into shock as she sees Akhilandeshwari getting down from the car, in front of her.

Akhilandeshwari narrates to Nandhini who is stunned, the manner in which she took the matters in her control. She narrates how she pointed the gun at the goon who was sent by Nandhini and asked him to call up Nandhini and tell her about Akhilandeshwari’s injury. Later, she confronts Nandhini, but instead of being intimidated by Akhilandeshwari’s confrontation she further blackmails her and asks her goons to bash up Akhilandeshwari, to this Akhilandeshwari stands strong and seems unaffected as she instructs Parvathy to prepare for a non-vegetarian meal and make it spicy as she is going to participate in a hunt.

In some time we realise that it is because Adithya is there along with her, that she spoke in such confidence. And Adithya bashes up all the goons of Nandhini. Finally, Adithya hands over a thick piece of log to Akhilandeshwari and asks her to break Nandhini’s leg with it. She holds that log in her hand and moves closer to Nandhini, who gets worried. But instead of hitting her with that log, we see that Akhilandeshwari throws it away and says that she does not like to bash her enemies up but instead likes to humiliate them. Then she challenges Nandhini to come to the party that Adithya has arranged.