After rejecting Guruji’s words, Purushottam convinces Akhila to check the horoscopes of all the three, just to be sure. 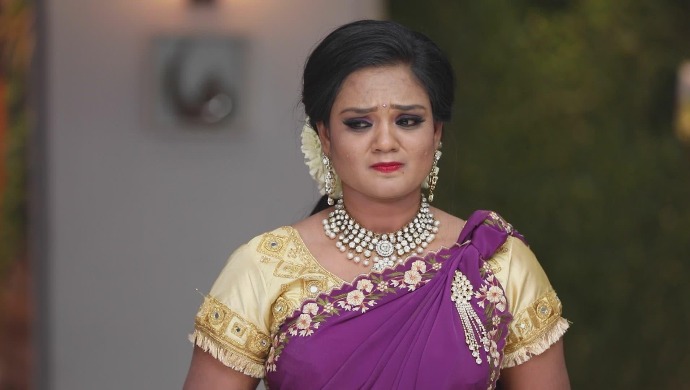 In the previous episode, Adi loses his cool with Mithra for insulting Parvathy. Akhila initially states that she is unhappy with his behaviour towards his future wife. However, Adi instantly says that Mithra’s stupid games to humiliate Parvathy might have backfired. He informs Akhila about the incident at the office and says that Mithra was rather irresponsible to do such things, as it would have cost them their company. She expects some support from Akhila after Adi storms off. However, even Akhila gets upset with her and slaps her. Later, Purushottam and Arun speak to their family Guruji and ask him to convince Akhila to change Adi and Parvathy’s wedding dates. He decides to pay her a visit and tells her that it is best to check for the right muhurtham, before finalising such big decisions.

Tonight, after Guruji tells Akhila that it is perhaps wise for her to check the right muhurtham before fixing Adi and Mithra’s marriage on his birthday. Hearing this, she snaps back at him. Proclaiming that it is her final decision, she apologises to the Guruji for her tone and excuses herself. Vanaja has a big grin on her face, knowing that Purushottam and Arun’s plans have failed. The two then have a conversation later, where they are thinking about what can be done, to change Akhila’s mind or even bring forth Mithra’s lie. Just then, Purushottam realises that Mithra has used Parvathy’s horoscope to get it matched with Adi.

The challenge now is to prove that Mithra has stolen Parvathy’s horoscope. They ponder over it for sometime and devise a plan to make Akhila check the horoscopes of Parvathy, Adi and Mithra. Later, Arun and Purushottam along with Aishwarya, sit and discuss Adi and Mithra’s wedding, when Vanaja overhears them. While Arun suggests that they don’t have to believe in horoscopes, Purushottam suggests that they should at least get the individual horoscopes checked, to know if anybody has some flaw in their chart.

Vanaja voices her opinion on behalf of Akhila when she enters. She also states that they don’t need to do any more muhurtham checks. However, Purushottam states that perhaps, if they can just check the individual horoscopes, it will help them to take up necessary actions. Initially, Akhila is not sold on the idea, but then realises, that maybe it’s not a bad option.

Purushottam visits Sundaram and informs him about this whole incident. All Sundaram can hope for is that things work out. The next day, Akhila calls for a chart reader to check Adi, Parvathy and Mithra’s charts. Just then, Mithra realises that she has swapped her chart with Parvathy’s and worries that Akhila might find out about the same.

Rettai Roja Star Shivani Narayanan Is A Trendsetter; Get Inspired By Her Style…

Why Has A Spirit Possessed Trisha In Mohini? Find Out Right Here

Sembaruthi's Vanaja Has The Best Explanation To Why She Likes Her Own Pictures And Posts!