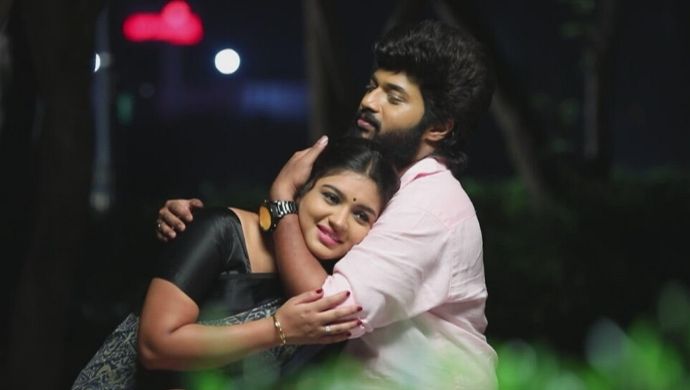 In the previous episode, Vanaja’s multiple attempts at getting the workers to like Mithra fails as she refuses do everything suggested by her wholeheartedly. Parvathy, on the other hand, wins the workers over quite easily. They even unanimously decide to vote for her at the elections. Mithra gets a call from her blackmailer asking her to get Rs 50 lakhs to a garden and drop it near a dustbin. She does so and leaves but the blackmailer gets attacked by Nandini’s goons. He gets shot on the calf and falls.

Despite getting shot, the blackmailer manages to escape. The goons tell Nandini that they lost him and she loses her cool. At home, Akhilandeshwari joins Mithra and Vanaja at the dining table. She asks Mithra how the prep for the elections are going on and Vanaja gives her a positive report. Parvathy is just about to serve Akhila when she stops her and tells her that she does not want Parvathy anywhere around her anymore. She also asks Pattamma to take charge of her needs from now on.

Vanaja and Mithra enjoy the scene but Parvathy is hurt. She cries and leaves the dining area. Later on, Adithya finds her sitting in the garden alone, lost in thoughts. He asks her what’s bothering her and she tells him everything that happened at home. Adithya comforts her by telling her that everything will be fine soon. He hugs her to make her smile and she cheers up.

Nandini asks her men to find out everything they can about the blackmailer and look at nearby hospitals. Later on, she meets Vanaja and Mithra asking about the election prep. Vanaja complains to Nandini about Mithra but they come up with another plan. Nandini tells them that if they give every worker Rs 5000 for a vote, everyone will definitely vote for Mithra.

8 Badass Characters You Must Know About In ZEE5 Original Series Police Diary 2.0