This is what's going to happen in tonight's episode of Sembaruthi. 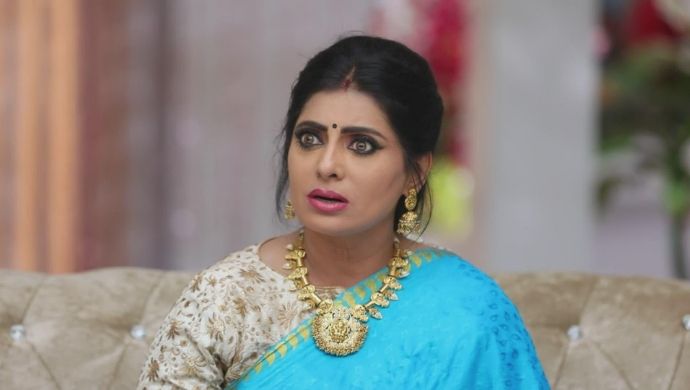 In the previous episode, Akhilandeshwari clarifies that she really likes Parvathy but not as her daughter-in-law. She tells Purushothaman that fate has been toying with them and getting them closer but she will not let that happen. In the meantime, Sundaram finds out about Parvathy’s marriage to Adithya and is stunned. He also decides to confide in Akhilandeshwari about it since he cannot be disloyal to his job. And so, despite Parvathy beseeching him repeatedly not to let Akhila know about anything, he walks off at full speed to meet Akhila and tell her that truth.

In the upcoming episode, Sundaram reaches the house and starts lamenting to Akhilandeshwari about how the inevitable has happened. He tells her that had he kept her in the loop from the beginning, they would have been able to put an end to it. Vanaja butts in to ask him to spill the beans already and Akhila stops her. She asks Sundaram to tell her what is bothering him. He tells her that his daughter has gone ahead and gotten married without his knowledge. Everyone is shocked on hearing this. Will Sundaram tell her that she is married to Adithya? Or will the other members of the house step in and divert the situation? To know more, watch Sembaruthi when it goes on air on Zee5 tonight.

If you have been newly initiated to the series, here’s what you need to know. Adithya, a business scion and Parvathy, his household cook, are secretly married to each other. The only ones who know about it are his father Purushothaman, sister-in-law Aishwarya and Pattamma, a faithful family servant. They hide their marriage from Akhilandeshwari waiting for her to slowly accept Parvathy. Things take a u-turn when Parvathy’s father, Sundaram finds out about them. For more such entertainment, watch Nachiyarpuram streaming on ZEE5.

Can't Find The Right Earring For Your Festive Look? Follow These Actresses For Inspiration