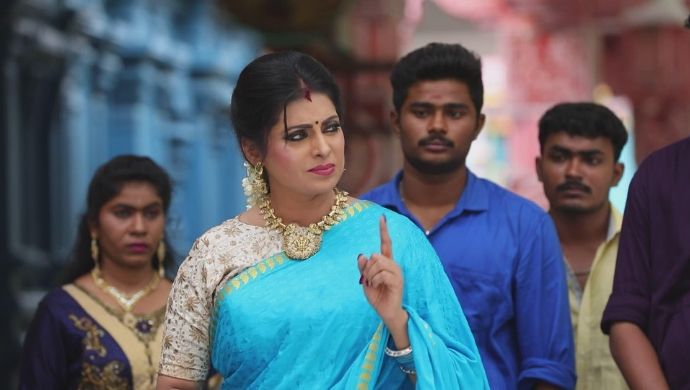 In the previous episode, Sundaram is torn between his daughter and his loyalty towards Akhilandeshwari. A suspicious Sundaram sets out to find out what everyone has been hiding from him. He finds out eventually that Parvathy and Adithya are married to each other. He is shocked and scolds her for cheating him and everything he stood for. Adding to her woes, Sundaram decides to tell Akhilandeshwari the truth about everything. Parvathy tries to stop him but he decides to tell her everything anyway since he does not want to betray his boss.

Parvathy calls Aishwarya and tells her everything. Aishwarya is shocked to hear what happened and decides to tell Adithya, Purushothaman and her husband everything. They are restlessly waiting for Sundaram in the house and are worried since Adithya’s phone is not reachable. They are aso wondering how to handle Sundaram and calm him down. Vanaja and gang see that they are worried and wonder what’s bothering him. They decide to hide and eavesdrop since they might change their plans after looking at them.

Just then, Sundaram walks in and laments about what happened. They try to calm him down and advice him against telling Akhila everything. Vanaja tells Mithra and Uma about her conversation with Sundaram. Parvathy’s father tells them how terrible he feels about betraying his boss and will never do it. Akhila walks in as Purushothaman is trying to convince him to not tell her anything.

Sundaram rushes towards Akhila as soon as he sees her. He tells her that before dropping her to the temple, he wants to tell her something. She tells him that they are running late so he can tell her whatever it is in the car. Arun and Purushothaman follow them in another car. Sundaram is looking for the right time to tell her everything but she is busy over the phone. Purushothaman also tries to call her to keep her distracted and keeps trying when her phone is busy.

Purushothaman and Arun also reach the temple then and rush inside to meet the two. Sundaram finds another opportunity to tell her the truth but gets interrupted by her husband and Arun. Both of them signal Sundaram asking him to not tell her anything. Akhila asks Sundaram what he wanted to tell her. Just then, they see a pair of parents calling out their kids for getting married without telling them. Akhila also goes to see the drama.

Akhila stops the parents from cursing the newlyweds and asks them to not curse their own son. She calms them down but also slaps the groom for such a cowardly act. She scolds him for betraying his own parents. She also tells them that a marriage must always happen with the blessings of the parents. She storms out of the temple after her speech. Sundaram follows her.

On reaching home, Akhila is busy on the phone and Sundaram waits for her to finish. Everyone gathers in the living room tensed about Sundaram’s revelation. Adithya also reaches home by then. Akhila notices Sundaram looking tensed and asks him to tell her whatever he wanted to tell her. He beats around the bush a little about his loyalty to her and about how he was also cheated. He tells her that Parvathy got married without even telling him. Everyone is shocked to find out about this. For more such entertainment, watch Yaaradi Nee Mohini streaming on ZEE5.

Can't Find The Right Earring For Your Festive Look? Follow These Actresses For Inspiration