Mithra tries to sneak out with the ransom money but Adithya sees her and confronts her. He asks her the reason for sneaking out of the house. 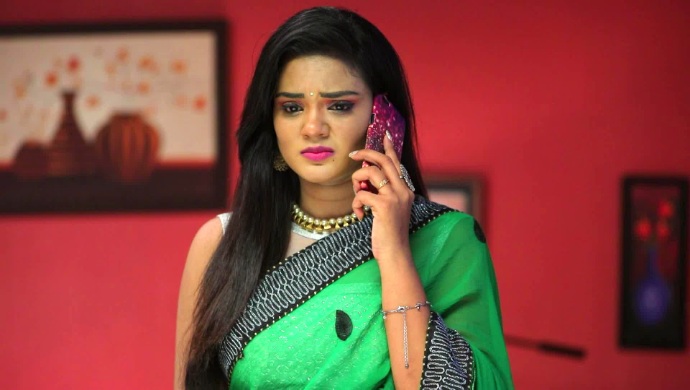 We see that Adithya and Akhilandeshwari are travelling back home after their conflict with Nandhini. In the meantime, Parvathy calls him and asks about the weird statements that Akhilandeshwari made over the phone, to this he says that he is with Akhilandeshwari and there is nothing to worry about.

Later, in the night while Mithra is sleeping in her room she gets the call from that anonymous blackmailer. And he blackmails her and asks for a ransom, Mithra is angry with him and tries to threaten him but he stands strong and insists on getting the ransom. Reluctantly Mithra agrees to pay the ransom amount and goes to meet him.

But while Mithra tries to sneak out with the ransom money Adithya happens to see her and confronts her. He asks her the reason for sneaking out of the house at this hour of the night. When she tries to reason with him, he tries to accuse her of cheating his mother and the others. Finally, Mithra tells him a lie and says that she is going to meet her friend who needs some financial help. So, Adithya tells her that he will accompany her, but while they are about to step out Adithya receives a call and seeing this as her window of opportunity and rushes out.

Later, she gives the money to the blackmailer in the manner that he demanded. However, after some time the blackmailer calls her again and asks her to behave according to his instructions in Akhiladeshwari’s party. To this Mithra refuses, so he sends her a video clip where he has recorded her activities while she pays the ransom money. After watching this clip she agrees to do his bid.

Finally, we see that Adithya comes to Paravthy’s house and speaks with her father about the party that he is arranging and tells him that Parvathy needs to wear the saree that he has got for her and also that she needs to stand with him to welcome the guests. This does not go well with Paravthy’s father and he seems upset.

So, what do you think will happen? Will Parvathy’s father agree to Adithya’s request?

Manmarziyaan: Rummi, A Free-Spirited Woman, Tries To Balance Her Desires With Her Obligations