Parvathy and Mithra are asked to validate the authenticity of their charts based on their fingerprints. Will Akhila learn about Mithra's truth? 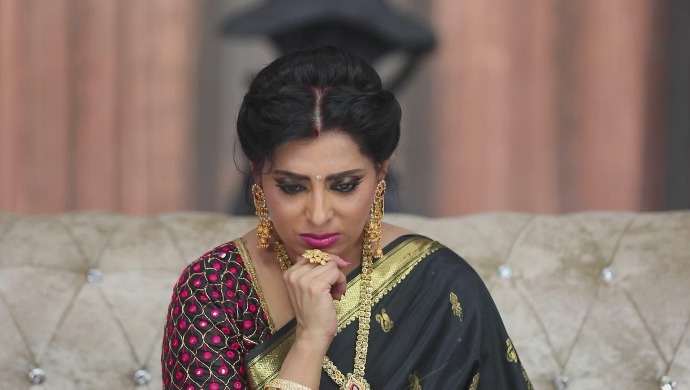 In the previous episode, Purushottam’s plan to make Akhila change the date of Adi and Mithra’s wedding fails, as she doesn’t listen to Guruji. She apologises to him for being disrespectful but states that it is her decision, that Adi will marry Mithra on his birthday. Purushottam and Arun then devise a new plan, to make Akhila realise that Mithra’s horoscope is flawed and that she switched hers with Parvathy’s, to get an approval for the alliance. They trick Akhila into checking if the horoscopes of Adi, Mithra and Parvathy, have any flaws that need to be rectified before the wedding. Akhila agrees that since their weddings have been called off in the past, it is best to get their charts tested before the wedding preparations begin. Mithra and Vanaja are flipping out, as they are worried that Akhila might find out about the chart manipulation that was carried out, to receive her approval for Mithra’s wedding with Adi.

Tonight, Akhila is seated along with a chart reader, who is reading Parvathy, Adi and Mithra’s charts. He has really good things to say about Adi and Mithra’s charts, as he states that there are no doshams, that the family needs to worry about. In fact, the charts are compatible. However, as soon as he reads Parvathy’s charts, he calls it a chart with several complications. In fact, he even says that the person’s marriage will always see hindrances. Arun instantly flips out and calls the chart reader, phony. He then brings it to Akhila’s notice that Parvathy and Mithra’s charts are the same. This means someone has played a dirty game to make Akhila approve of Mithra’s charts. Arun then attacks the chart reader, and asks him to tell them about who made him lie so blatantly. He looks at Vanaja, who indicates him to not mention her name. The chart reader gets some beating from Arun, before rushing out of the house.

Arun and Aishwarya then suggest that Guruji should be called and asked to check the authenticity of the chart, and who the rightful owner is. Akhila seconds this idea and brings Guruji home. He checks both the charts and realises that they’re practically the same. Arun then suggests that perhaps based on the characteristics, as mentioned on the chart, the two be compared with Mithra and Parvathy. It’ll be easier to prove who the chart belongs to. Mithra is worried as this practice will easily show that the chart is not hers.

Guruji states that based on the fingerprints of Parvathy and Mithra, the chart’s ownership can be deduced. Aishwarya then goes to Parvathy’s place to pick her up for this experiment. Mithra doesn’t want to participate, as she is certain that her truth will be revealed. Aishwarya explains to Parvathy about the horoscope forgery scene. She is reluctant as Akhila is not very fond of her. But eventually, Parvathy accompanies Aishwarya to their house. The two are asked to apply their inked fingers on the paper, so that Guruji can analyze it.

Will Aadi Be Able To Reunite Families In Vantha Rajavatha Varuven?

Thumbaa Trailer: Dheena And Keerthi Pandian Join Forces To Save A Forest!