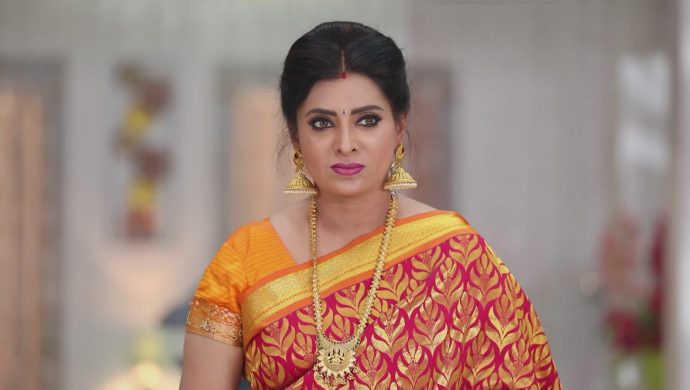 In the previous episode, we saw that since Mithra is not able to win the workers’ hearts with her personality, Nandini advises them to bribe the workers instead. Adithya is still not able to figure out how or why Deepak’s hints could have been wrong and comes to a conclusion that Ashok is bad news. At home, Akhilandeshwari humiliates Parvathy and asks her to just stay in the kitchen and not show her face. Parvathy is hurt by Akhila’s behaviour but cheers up when Adithya comforts her later in the evening.

Vanaja and Mithra reach office and distribute envelopes with Rs 5000 in it. They tell the workers that they are paying them so well so they vote for Mithra in the upcoming elections. The workers are really happy and discuss among themselves about how generous Mithra is. Out of greed, they decide to vote for Mithra.

Just then, a man from Parvathy’s side gives them a different set of envelope. The workers excitedly take it hoping to see more money in it but they only find blank papers on it. Adithya walks in then and explains to them that the money given by Mithra won’t last very long and if she was really good at her job, she would not have needed to do this.

He also talks Parvathy up by saying that she will actually try to solve all their troubles since she is one of them. He asks them to write down all their problems on the paper and also makes them realise that bribery is wrong.

The workers feel guilty and go to Akhilandeshwari’s house to return the money. Vanaja and Mithra are disappointed with how things turn out. Akhila overhears everything and after the workers leave, she lashes out at Vanaja and Mithra. Vanaja takes the blame for everything since she wants to protect the truth about Nandini. Akhila gives them a last warning.

Akhila is now worried about her own image along with Mithra’s since all of Mithra’s moves are only turning workers in Parvathy’s favour. The next day, she asks all the workers to assemble and they are wondering what might the assembly be for. Adithya and Parvathy also reach.

At the meeting, Akhila slaps Mithra in front of everyone and scolds her for trying to ruin her image. She then slyly also tells the workers that she is representing and she knows that the workers will never let her fail, leaving everyone in a fix.

Police Diary 2.0 Episode 7&8 Review: This Murder Mystery Will Give You Sleepless Nights