Parvathy walks in and confronts Mithra. They both argue and in the heat of the situation, Parvathy slaps her. 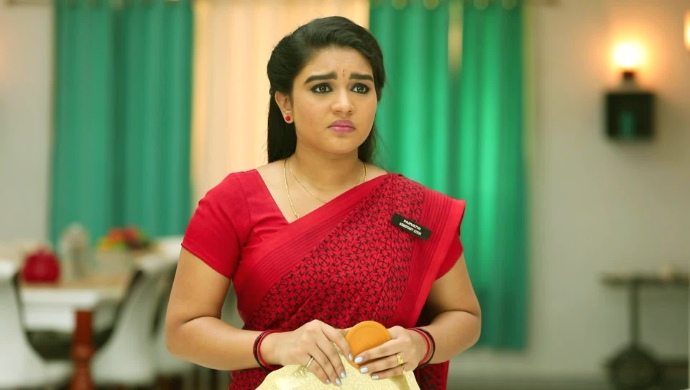 In the last episode of Sembaruthi, we see that Mithra tries to sneak out with the ransom money, for the blackmailer but Adithya happens to see her and confronts her. He asks her the reason for sneaking out of the house at that hour of the night. When she tries to reason with him, he tries to accuse her of cheating his mother and the others. Finally, Mithra tells him a lie and says that she is going to meet her friend who needs some financial help. However, after getting the money, the blackmailer calls her again and asks her to behave according to his instructions in Akhiladeshwari’s party.

In today’s episode, we see that Adithya asks Parvathy’s father to give the saree to her and allow her to come to the party that he has arranged. Reluctantly, Sundaram agrees to it and gives the saree to Parvathy. Meanwhile, Nandhini meets with one of her associates and makes a plan to spoil Akhilandeshwari’s party. At the same moment, we see that Adithya and Arun make plans to be cautious of Nandhini and prepare themselves to face any type of threat from her side.

Later, we see that Shyam walks into Adithya’s room and asks his opinion about a saree that he has got for Sindhu. When Adithya does not give him a proper response so in turn Shyam asks Adithya’s help and asks if he can take one saree out of the lot that Akhilandeshwari has bought. Adithya in an attempt to scoot off Shyam agrees to it and allows him to take one.

But when he tries to gift it to Sindhu, he realises that it was she who had purchased all the sarees for Akhilandeshwari and she is aware of the fact that Shyam is trying to gift her one of those sarees. Finally, after some conflicts, Shyam brings the saree that he had actually got for her and she accepts the gift.

Meanwhile, we see that Mithra is talking to Nandhini and is pleased about the plan that she has made to hurt Akhilandeshwari’s image. But at that time Parvathy walks in and overhears the entire conversation and she confronts Mithra. They both argue and in the heat of the situation, Parvathy slaps her. Mithra is angry with this and she threatens to tell this incident to Akhilandeshwari, but Parvathy replies to her and says that if she goes to Akhilandeshwari than she would also have to tell the truth about Mithra.

So, what do you think will happen? How is Nandhini going to hurt Akhilandeshwari?

Shakti Is Over The Moon As Poove Poochoodava Completes Two Years