Mithra is safe, as Guruji is unable to tell if her chart is different from Parvathy's. Find out how she escaped trouble. 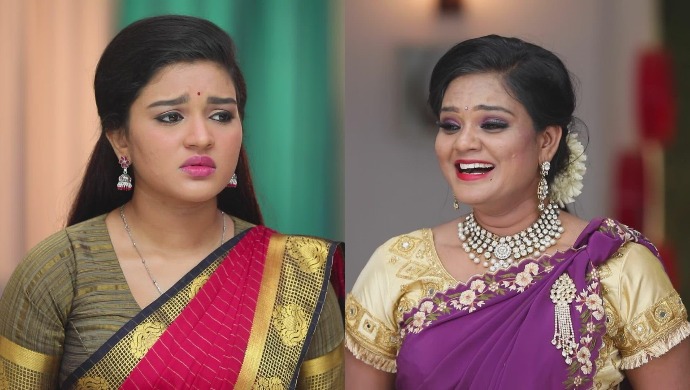 In the previous episode, Vanaja bribes the chart reader, to say nasty things about Parvathy’s chart, in front of Akhila. However, her plan backfires when Arun calls out the reader. He points out that both Parvathy and Mithra’s charts are the same, and that someone has stolen the other person’s chart. Akhila also checks the two charts and realises that they are the same. The family calls Guruji and asks him to check who is stating the truth, as it can be analysed from the chart. He offers a solution and states that based on the fingerprints of Parvathy and Mithra, he can judge who is lying about their horoscope. Aishwarya goes to call Parvathy for the fingerprint, while Mithra freaks out, as she is sure the Guruji will find out the truth about her.

Tonight, Mithra and Parvathy mark their fingerprints on a paper and give it to Guruji. He starts analysing, it while Vanaja and Mithra are worried. They are all waiting in anticipation, when Guruji finally states that he is unable to tell the difference between their signatures. This shocks Arun, Aishwarya, Purushottam and Parvathy, as two people cannot have the same fingerprint, no matter what. Mithra and Vanaja are confused but happy, knowing that their lie is not caught. Parvathy is shocked and unable to comprehend how this happened. Akhila is relieved, as she learns that both Parvathy and Mithra have good charts, and that they don’t have any doshams. This means the wedding preparations can go on, without any hassle. It is revealed later that Nandini had something to do with the confusing fingerprints, which made it difficult for Guruji to comprehend which chart belongs to whom.

Nandini then tells Mithra that she should be very careful, as it is important that the marriage takes place without any more complications. Since both the parties are vying for Adi’s birthday to change their fates, it is a race against time. Parvathy meets Adi, and tells him about the failed experiment by Purushottam and gang, as they were unable to expose Mithra’s fake horoscope. However, he consoles her and tells her that there is nothing to worry about. They then hug it out and go their separate ways.

Adi’s spy is in Nandini’s office, when her uncle comes over. He asks the spy to leave the office, as he doesn’t want their family secrets to be out. The uncle then starts telling Nandini about how she is the only one who can destroy Akhila’s family. He then asks her and Mithra to come over and sign off a property for sale, as he thinks it’s not getting them good business. She agrees and tells him that she will get Mithra on-board as well.

How Will Thiru Save Venba In Malaysia And Bring Her Back To Safety?

Happy Birthday Urvashi! We Bet You Don't Know These Facts About The Dhilluku Dhuddu 2 Star