Uma overhears Adithya and Parvathy's conversation about the reception. She immediately informs this to Vanaja, who is stunned to hear this. 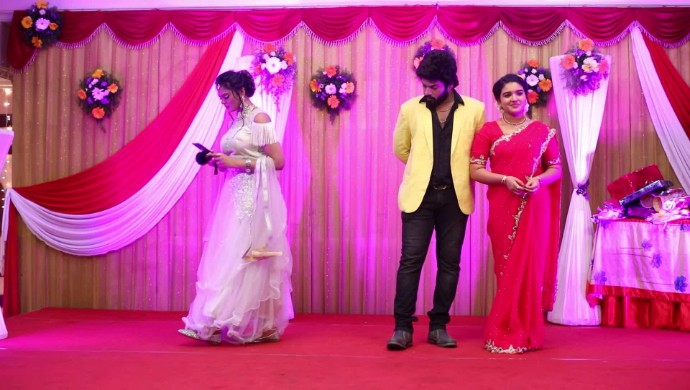 In the last episode of Sembaruthi, we saw that Nandhini meets one of her associates and makes a plan to spoil Akhilandeshwari’s party. At the same moment, Adithya and Arun make plans to be cautious of Nandhini and prepare themselves to face any type of threat from her side. Later, we saw that  Parvathy walks into the room when Mithra is talking to Nandhini about the plan that she has been made to hurt Akhilandeshwari’s image. They both argue and in the heat of the situation and Parvathy slaps her.

In today’s episode, we see that Shyam is happy to see that Sindhu has worn the saree that he has gifted. In his excitement, he goes to her to confirm the saree, but instead of speaking to him she hands him a note and a packet. When Shyam reads the note he realises that Sindhu has gifted him a shirt and pant in return. This makes him happy and he goes to Adithya to boast about it and quickly changes into new clothes. After that, he goes to meet Sindhu again but this time too she hands him a note.

When Shyam opens it, he realises that it is the bill for the gift that she just got him. When he questions her about this she says that even he had given the gift with a bill along with it. Saying this, she walks off and Shyam stands ashamed not knowing what to do. At that moment Adithya walks in and pulls Shyam’s leg and walks out of the room.

When Mithra tries to do that, Adithya steps away and edges closer to Parvathy. In the meantime, Mithra receives a call from the blackmailer and she moves away. Vanaja is worried about Mithra’s behaviour and so she asks Uma to go and make Mithra stand near Adithya. But while passing by Adithya, Uma overhears Adithya and Parvathy’s conversation about the reception. She immediately informs this to Vanaja, who is stunned to hear this.

So, what do you think will happen? Will Vanaja find out the truth about Adithya and Parvathy’s marriage?

If you like watching such thriller movies, check out other Tamil thrillers streaming on ZEE5.

From Achamindri To Kaaval: Check Out 5 Films Of Birthday Boy Samuthirakani