Adi asks Parvathy to wake up as he desires to live with her as husband and wife. Will Parvathy survive? 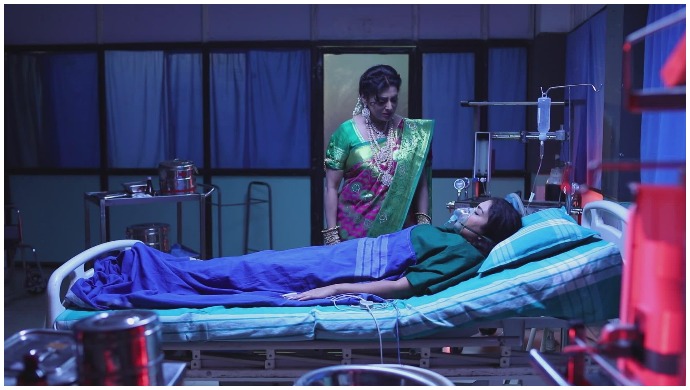 In tonight’s episode, Nandini is happy to find out that Parvathy is in a critical condition and chances are that she may not survive. Meanwhile, Adi speaks to the doctor, asking him about Parvathy’s condition. He gets frustrated as his wife has not gained consciousness ever since they brought her to the hospital. While the doctor tells him that they are trying their best, Adi loses his cool as he can’t see any improvement in Parvathy. Then, Akhilandeshwari, who changes her mind about meeting Parvathy, makes her entry to the hospital. She goes directly into the ICU and Vanaja is confused and shocked to see Akhila at the hospital.

Akhila, who has come to see Parvathy, talks to her while she is unconscious. She says that she is disappointed in her as she did not tell her before about the secret wedding. Also, she tells her she likes her for her honesty and nature but that does not mean she can accept her as her daughter-in-law. She does not think of Parvathy to be her son Adi’s match. Later she instructs Parvathy to wake up and come back to their lives and requests her to not break her heart by not following her instructions. Later, even Adi speaks to Parvathy and asks her to wake up as he can’t wait to live with her as husband and wife.

So, what do you think of tonight’s episode? Share your thoughts in the comment section below. Also, watch Tamil action drama web series, Topless, starring Guru Somasundaram on ZEE5.