Akhila is unhappy with Parvathy's audacity to make decisions on her behalf. Will she get fired for overstepping her role? 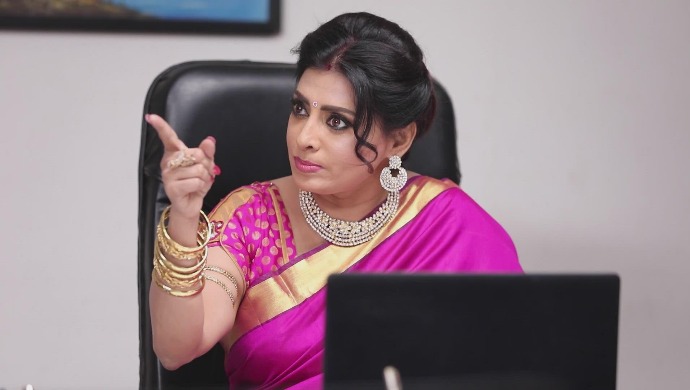 In the previous episode, Mithra and Parvathy share their fingerprints with Guruji, so that he can distinguish between their charts. However, after pondering for a long time, he announces that even their fingerprints are identical. Everybody is shocked because that is impossible. Eventually, Guruji states that their charts are equally good with no doshams, so the wedding preparations don’t need to be put to a halt. Later, Nandini reveals that she managed to do something about the fingerprint, to ensure that Mithra never gets caught. Parvathy is hurt and let down, as she had hoped for Mithra’s lie to finally come out in the open. Meanwhile, Nandini’s uncle asks her and Mithra to come down to an office to discuss selling off a certain property. During this conversation, he also tells Nandini that the family is hoping for her to vanquish the Adhikadavur clan.

Tonight, Parvathy meets Akhila in her cabin, and informs her about an incident concerning their workers. She states that the employees have been complaining about bad canteen food, served by the company. The workers recommend a caterer for their office and Parvathy hires the said person, as the employees like the food. However, Akhila gets furious at her for making decisions, without mentioning about the same to her. Parvathy tries to explain that she did it to avoid Akhila from concerning herself with small matters. But Akhila goes on a rant. How will this affect their relationship? Stay tuned!

Sathya 25 January 2020 Preview: Prabhu And Sathya To Go On A Honeymoon?