Akhilandeshwari who walks in at that moment is happy to see Parvathy out of danger and she kisses her forehead. 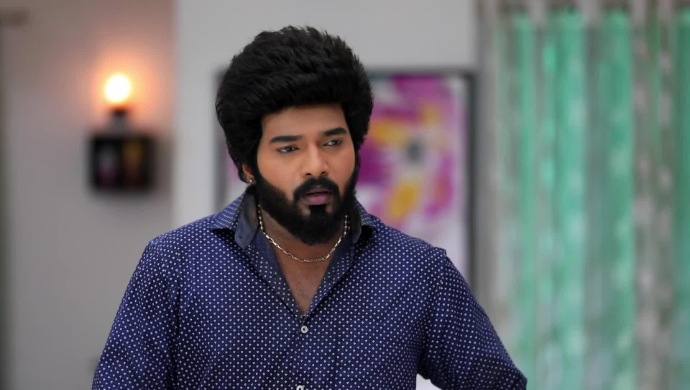 In the last episode of Sembaruthi, Adithya and the others are worried about Parvathy’s health condition. So, when the doctors come out to inform him about Parvathy’s condition he becomes angry and asks them for an explanation for Parvathy’s condition. After many confrontations, the main doctor confesses about what happened and explains to Adithya about the goof up that happened in the administration of anaesthesia. Later, when Adithya realises that it was Nandhini who orchestrated this whole event he calls her up and says that if anything happens to Parvathy then he will kill her.

In today’s episode, we see that Adithya is still worried about Parvathy’s condition and he sits beside her and he talks to her. In a few moments after he starts speaking Adithya sees that Parvathy has tears running down from her closed eyes and he realises that Parvathy can somehow manage to hear things, even in coma state. So, he asks Ganeshan to further speak to her. In the event of these talks, Parvathy shows some signs which look positive to Adithya, so he asks Shyam to go and fetch the doctor.

Suddenly, we are shown the image of the old hermit who blessed Parvathy in the hospital and at the exact moment, Parvathy opens her eyes. When the doctor comes in and checks Parvathy. He is surprised and says to Adithya that it is a medical miracle. Akhilandeshwari who walks in at that moment is happy to see Parvathy out of danger and she kisses her forehead. This shocks Vanaja and she is not at all happy with the events.

Finally, at the hospital, he informs Parvathy about his Mumbai trip and says goodbye to her very subtly as Sundharam was present at the hospital. After this, Adithya takes down the number of a nurse at the hospital so that he could keep a check on Parvathy’s situation. However, the nurse seems to have misunderstood Adithya’s intention. Later, while driving to the hospital Adithya is immersed in the thought of Parvathy and he seems to have nearly rammed into another speeding car.

So, what do you think will happen? Will Adithya be able to come back soon, from Mumbai?

Kedarnath: Watch The Love As It Blossoms During The Time Of The Uttrakhand Floods

Exclusive: How Was It To Work With Prasanna In Thiravam For Kaali Venkat?