Nandhini is eyeing her associate who has also come to the party. They both share meaningful glances as if they have planned something evil. 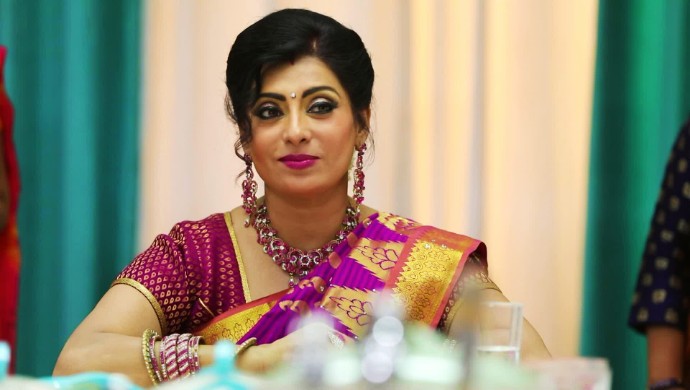 In the last episode of Sembaruthi, Shyam and Arun make plans for the reception cum party that Adithya is hosting. Later, during the party, Adithya and Parvathy get on the stage and receive the gifts for Akhilandeshwari. But Vanaja and Mithra are not happy to see the situation that is being created and Vanaja asks Mithra to go and stand near Adithya. When Mithra tries to do that, Adithya steps away and edges closer to Parvathy. In the meantime, Mithra receives a call from the blackmailer and she moves away. While passing by Adithya, Uma overhears Adithya and Parvathy’s conversation about the reception. She immediately informs this to Vanaja, who is stunned.

In today’s episode, we see that Mithra confines to Vanaja about her concerns regarding the blackmailer. Vanaja is shocked to hear about this incident and asks Mithra not to be worried as she will definitely find out a way to handle this situation. She asks Mithra to be close to Adithya and not let Parvathy and Adithya stand together.

Meanwhile, on the demand of the public gathered, Arun and Aishwarya perform a dance number on the stage. Vanaja sees this and asks Mithra to go toAdithya and ask him for a dance but she is reluctant to approach him. In the meantime, some people who want to build a new college approach Vanaja with a bribe. Vanaja is tempted by the offer and she agrees to do their bid.

Later, we see that Sundharam is not happy to see Parvathy and Adithya standing on the stage close to each other. So, he asks Parvathy to step aside. At that moment Akhilandeshwari is seen walking into the hall where the party is being hosted. She seems to be in a jovial mood and is pleased to see the arrangements that have been made. But at the same time, we see that a guest walks on to the stage and gifts Adithya and Parvathy a gift and congratulates both of them. He also says that they both look cute together and that they are made for each other.

Akhilandeshwari is not happy to hear this and she asks Parvathy to step down. Incidentally, Nandhini walks in with a gift and she sweetly tries to threaten Akhilandeshwari. Later, we see that Nandhini is eyeing her associate who has also come to the party. They both share meaningful glances as if they have planned something evil.

So, what do you think will happen? Will Akhilandeshwari be able to ward off Nandhini’s plan?

Toilet-Ek Prem Katha: Watch The Struggle Of a Man Against The Prevalent Social Norms