We wonder if Adi will be able to explain Parvathy, who is disappointed with him, why he rejected to take his mother's help. Read the full update. 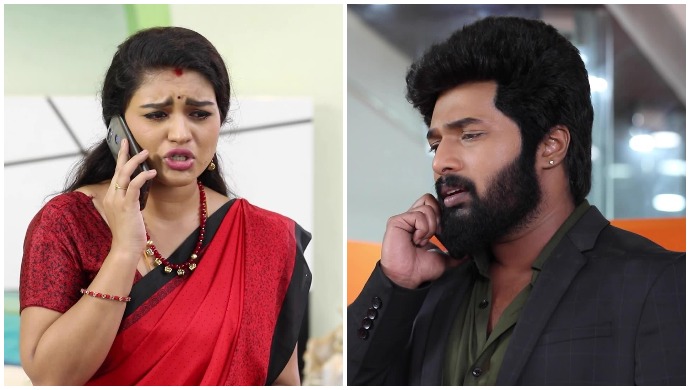 In the previous episode of Sembaruthi, Akhila agrees to put up the security deposit that Adi needs to start this new project. Her decision to give him the money comes as a surprise to Nandini, who is also present there. After that, Akhilandeshwari warns Nandini to maintain a safe distance from her family. Adi is informed that Akhilandeshwari walked to their office to give security and sign the papers. However, Adi refuses to take the project offer as he does not want to start his independent business with the help of his mother. He then tears the agreement paper and storms out. Meanwhile, at home, Parvathy informs Purushttom that Adi has gone to submit his project and that she is worried about it. Just then, Akhila enters the house.

In tonight’s episode, Akhilandeshwari, who returns home, informs her family about the favour she has done for her son Adithya by signing the security papers. She tells them that she may be angry at him but his happiness is what matters to her the most. Just then Akhila receives a call from Nandini, who informs her that Adi has refused to take up the project. Akhila does not believe Nandini. The latter tells Akhila that Adi, who came to know that she has signed the security papers, did not want to start his business by taking her favours. Nandini adds that she can confirm this with Adi when he comes home.

Akhila gets furious and tells everyone about the phone call. She tells them that she never expected her son to have changed so much that he will show ego to his mother. While everyone is disappointed with Adi’s actions, Vanaja feels happy to see frowning faces in the house. Parvathy, who is very disturbed and disappointed with Adi, calls him to ask the reason behind hurting his mother. She tells him that finally, things could have fallen in place but his decision has got things back to where it was. While Adi tries to convince her, she refuses to listen to him. Will Adi be able to explain to Parvathy why he rejected his mother’s help? Stay tuned!

Thodraa: 5 Reasons Why Prithvi Rajan And Veena’s Film Is A Must-Watch

What do you think of tonight’s episode? Share your thoughts in the comment section below. If you like to watch more such shows, also watch Nachiyarpuram currently streaming on ZEE5.

Yaaradi Nee Mohini 27 March 2020 Preview: Who Is This Mystery Woman With Maruthu?