As Parvathy's father does not allow her to take her mother's photograph, she gets disappointed. Parvathy decides to never come home. Read the preview. 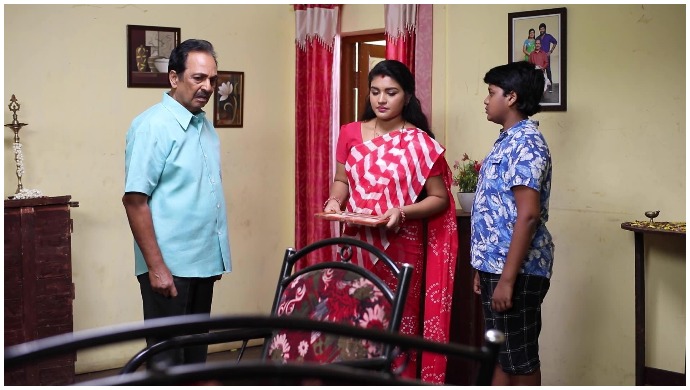 In the previous episode of Sembaruthi, Akhilandeshwari, who returns home, informs her family about the favour she has done for her son Adithya by signing the security papers. Just then Akhila receives a call from Nandini, who informs her that Adi has refused to take up the project. Nandini adds that she can confirm this with Adi when he comes home if she does not believe her. Akhila gets furious and tells everyone about Adi’s behaviour. She tells them that she never expected Adithya to have changed so much that he will show his ego to his mother. Parvathy, who is very disturbed and disappointed with Adi, calls him to ask why did he hurt his mother. She tells him that, things could have fallen in place but his decision has ruined everything. While Adi tries to convince her, she refuses to understand him.

In the upcoming episode, Parvathy, who goes to meet her Appa and brother Ganesha, wants to take her mother’s photo-frame with her as she misses her a lot. But her father, who has been pretending to be angry with Parvathy to be in good books of Akhilandeshwari, refuses to give her the frame. So, she indirectly tells her father that nothing could be a bigger punishment than not letting a daughter have her mother’s picture. She further tells Ganesha (her brother) that this is the last time she is coming to the house. Parvathy’s father then tells Ganesha that she can take the photo-frame with her. When will Parvathy’s father stop pretending to be angry with his daughter and openly accept her?

What do you think of tonight’s episode? Share your thoughts in the comment section below. If you like to watch more such shows, also watch Rettai Roja currently streaming on ZEE5.

Sathya 27 March 2020 Preview: Kullabootham Lies To Prabhu And Gets Into Trouble