Gajendran informs Parvathy that Nandini is poaching their employees. But will Parvathy be able to convey this message to Akhila? Read the full update. 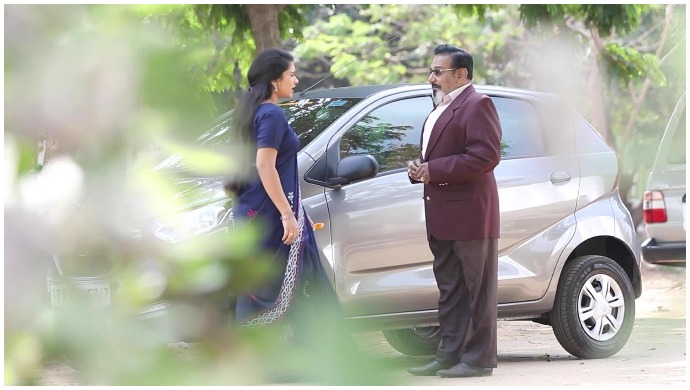 In the previous episode of Sembaruthi, Akhilandeshwari returns home, informs her family about signing the security papers for Adi. Just then she receives a call from Nandini, who informs her that Adi has refused to take up the project. Nandini adds that she can confirm this with him if she does not believe her. Akhila gets furious and tells everyone about Adi’s behaviour. She tells them that she never expected Adithya to have changed so much that he will show his ego to his mother. Parvathy, who is very disturbed and disappointed with Adi, calls him to ask the reason behind hurting his mother. She tells him that, things could have fallen in place but his decision has ruined everything. While Adi tries to convince her, she refuses to understand him.

In tonight’s episode, Akhilandeshwari is seen pretending to be upset because her son refused to take her help for the project. Actually she feels proud of Adi to have declined the offer as she would have done the same in that situation. Meanwhile, Vanaja meets Nandini and tells her what happened in the house when Akhila found out about Adi declining the project offer. She says that she knew Akhila would offer to help while Adi would decline. Nandini adds that they don’t really have to lay a trap for the two but instigate them. Parvathy visits her father’s house to meet Ganesha. While she is cleaning the house, she notices her mother’s frame and tells Ganesha that she misses her. Ganesha asks her to take the frame but her father doesn’t allow her. Parvathy gets upset and indirectly tells them that she will never come to this house ever again. But then her father lets her take the frame.

Later, Ganjendram visits Akhila’s house to tell her about the problem in the factory and that Nandini is poaching her employees. However, Vanaja does not allow him to meet Akhila. She tells him that Akhila is not home and that she will inform her when she returns home. Fortunately, Gajendran meets Parvathy outside the house and tells her about the problems happening in the factory in Akhila’s absence. He also tells Parvathy that this is all Nandini’s game plan. Will Akhila find out the truth about the factory. Will she hear it from Parvathy? Stay tuned!

What do you think of tonight’s episode? Share your thoughts in the comment section below. If you like to watch more such shows, also watch Nachiyarpuram currently streaming on ZEE5.