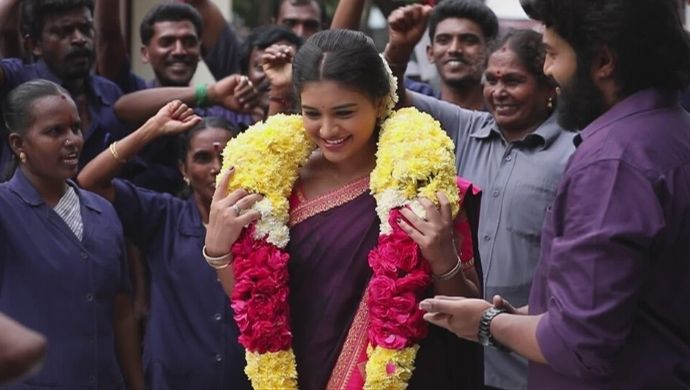 In the previous episode, everyone seemed tensed and nervous about the elections. Adithya and Ganesha are confident that Parvathy will win while Sundaram is not. The next day, the voting begins and Vanaja, Mithra are excited since all the workers tell them that they have voted for them. Meanwhile, Akhila tries to sort all differences with Adithya and feeds him some rice. Parvathy feels overwhelmed on seeing this moment.

The voting ends and the results are out. Everyone is shocked that the results are in Parvathy’s favour. Vanaja and Mithra are also confused. Akhila asks the person in charge of counting votes to re-count the votes. Just then, Adi stops her and asks her to watch a video that changed everyone’s minds.

Akhila watches the video that was captured when Mithra taunted Parvathy in the temple. But there’s more than what meets the eye. After Mithra taunted Parvathy at the temple, turns out she stopped her and requested her to not let the workers suffer. Mithra gives it back to her by saying that she will make sure the workers suffer for making Akhila slap her in public by returning the money that she sent them. After watching all of this, Akhila is taken aback and furious. She slaps Mithra, scolds her and storms out.

Everyone announces Parvathy as the winner and cheer for her. Akhila turns to see them cheer and smiles a little bit. The workers celebrate by getting a huge garland for her.

At home, Mithra is furiously sitting and wondering how everything went wrong when the blackmailer calls her. He tells her that he was the one who leaked the video to the workers. The episode ends with Aishwarya worrying about how Akhila will treat Parvathy now that she has won the elections.