As Parvathy informs Akhila about the problems in the factory, the latter lashes out at her and tells her to get out of her room. Read the full update. 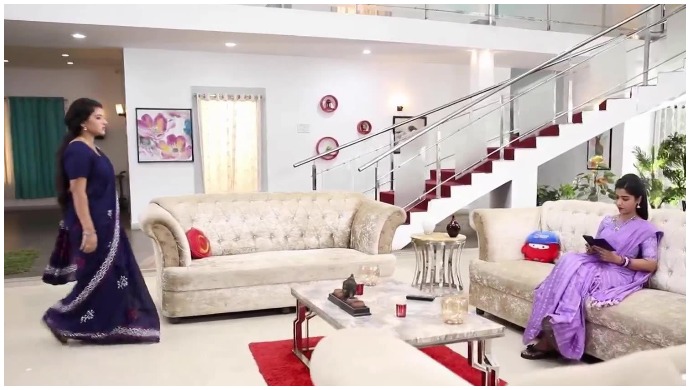 In the previous episode of Sembaruthi, Akhilandeshwari acts as if she is upset because her son refused to take her help for the project, but she feels proud of him for declining the offer. She thinks that she would have done the same in that situation. Later, Vanaja and Nandini meet and discuss how they can create more problems between Akhila and Adithya. Meanwhile, Gajendran comes to meet Akhila and inform about the problems occurring in her factory. But Vanaja does not allow him to meet Akhila. She tells him that Akhila is not home and that she will convey the message to Akhila when she is back. Since Gajendram wasn’t able to meet Akhila, he tells everything to Parvathy when he meets her outside the house.

In tonight’s episode, Gajendran tells Pavathy that he came to meet Akhilandeshwari but Vanaja informed him about her absence. Then Parvathy tells him that Akhila is at home but wonders why Vanaja lied to him. Gajendran tells Parvathy that the factory is running in loss and he came to discuss the same with Akhila. He also tells her that the company is facing a loss of crores of rupees due to falling of shares and Nandini is using this opportunity to her advantage. He adds that Nandini has also offered jobs to their factory men, promising that she will double their pay if they join her. Parvathy is shocked to hear all of this and tells him that she will take him to Akhilandeshwari and he can tell her everything. Gajendran tells Parvathy that Akhilandeshwari would not like it if Parvathy takes him to her so he assures her that he will use another way to bring these issues to Akhilandeshwari’s notice.

Parvathy then questions Vanaja about lying to Gajendran. But Vanaja does not show any signs of being guilty. Parvathy tells Vanaja that she can’t stop her from revealing everything to Akhila, while the latter tells her Akhila will never entertain her. Parvathy still goes to Akhilandeshwari’s room to inform her about everything she learnt about the factory. However, Akhila, who has still not forgiven Parvathy for her betrayal, lashes out at her and orders her to leave the room. Despite Parvathy dropping a hint that it is an important matter about the factory, Akhila warns her that she should not try talking to her in future, making such excuses. Later, Vanaja taunts Parvathy but the latter tells her that someday truth and dharmam will win. How will Akhila now find out the status of her factory? Stay tuned!

What do you think of tonight’s episode? Share your thoughts in the comment section below. If you like to watch more such shows, also watch Rettai Roja currently streaming on ZEE5.