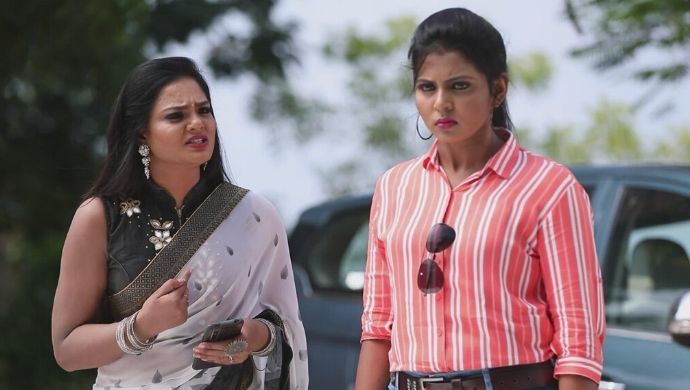 In the previous episode, Akhilandeshwari buries the hatchet with Adithya and tells him that things will get back to normal once the elections are over. After the voting is done, Akhilandeshwari finds out that Mithra’s actual intentions were to seek revenge from the workers for returning the money that she bribed them with. She slaps Mithra in front of everyone and storms out. Parvathy wins the elections and the workers celebrate it with her.

Parvathy tells her mother that she is unhappy with the results since Akhila will only hate her now. Just then, Adithya comes over with a box of sweets. They spend some quality time with each other. Aishwarya tells Arun that Parvathy had Akhila’s support before when she got tortured by Vanaja and Mithra. She tells him that she is scared that Parvathy will have to endure everything alone now. Arun asks her to not worry since Adithya must have definitely thought of something. He asks her to stop worrying about Parvathy.

At home, Ganesha waits for Sundaram to come home since he wants to bring up the family photo topic. Parvathy advises against it but Ganesha does it anyway only to get a scolding from Sundaram. Nandini slaps Mithra and is furious at her for ruining everything. Vanaja also feels that Mithra deserves the slap. Mithra also brings up the blackmailer and so does Nandini. Vanaja comes to a conclusion that Adithya is the blackmailer but the other two beg to differ.

At home, Vanaja’s cousin Vadivelu comes from the village to meet her and they reminisce about the old times. He also tells her that he wants to marry someone he falls in love with instantly. Akhila also enters the living room and catches up with him. He tells Vanaja that he will stay with them for a couple of days.