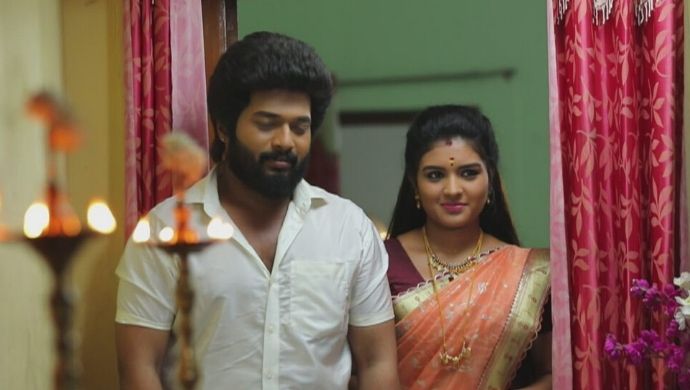 In the previous episode, Parvathy’s expresses her desire to celebrate her first Diwali as a married woman with Adithya. She wants Sundaram to invite Adithya over for thala deepavali. After much coaxing and an indirect approval from Akhilandeshwari, Sundaram obliges and invites Adithya over for the festival. Akhilandeshwari is getting more suspicious of the family members and trying find out what they are hiding from her. On the other hand, Vanaja hands over the sweet box to Parvathy that has a bomb in it and is waiting for it to explode.

Parvathy is lost in thoughts sitting in the living room. Ganesh asks her why she made such little savories and sweets for Diwali this time. She tell him that she knows Sundaram is only inviting Adithya because everyone is forcing him to and is not doing it whole-heartedly. Just then, Sundaram comes home and guesses exactly what they might have been discussing.

He also tells them that he formally invited Adithya and he also accepted. He then asks Parvathy to go cook a nice meal and prepare for other formalities. While Parvathy is cooking, Sundaram gives her a list of delicacies that Adithya really likes and asks her to cook all of it. She makes all of it and is eagerly waiting for Adithya to come home.

The next morning, Akhila, Purushothaman, Arun, Aishwarya, Vanaja and Mithra are bursting crackers outside the house happily. Purushothaman tells Akhila that he sent Adithya to call all of their work acquaintances and wishing them a happy Diwali. Vanaja goes inside the house to look for Uma and finds her hogging in the kitchen. Uma gets a good hearing from Vanaja and a little beating, too. She orders her to go shower and get ready for Diwali.

Pattamma sees Sundaram take home banana leaves and asks him about it. She asks him if that he’s got them to feed the new mappilai with. Sundaram gets a little scared and asks her to lower her tone. Ganesh sees Sundaram talking to Pattamma with the leaves and calls Parvathy immediately. They are happy to see him. Sundaram tells Pattamma that he is still scared of how Akhila will react on finding out about it.

Parvathy has prepared everything before Adithya comes. He also keeps a set of gifts ready for her. Vanaja sees Adithya leave the house with gifts and crackers. She is happily thinking about how everything is going to be ruined. Adithya comes to Sundaram’s home and everyone welcomes him. Again, Adithya asks him to address him as Mappilai and threatens to leave if he doesn’t. Sundaram obliges and Adithya immediately agrees to stay. All of them have a good time together. Uma and Mithra are waiting outside their house at a distance waiting for it to explode. For more such entertainment, watch Poove Poochoodava streaming on ZEE5.