Sembaruthi 28 September 2019 Written Update: Akhila Thanks Parvathy For Saving Her

Akhilandeshwari tells everyone that when she has Parvathy by her side, she has no reasons to worry. Thus, Akhila embraces Parvathy once again. 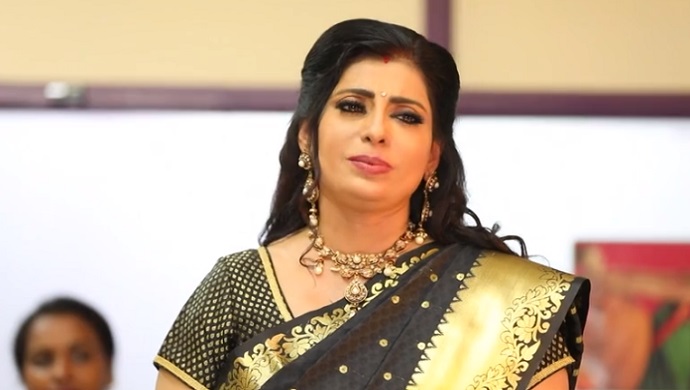 In today’s episode of Sembaruthi, Akhilandeshwari tells Parvathy that she feels indebted to her for saving her life again. She feels that her parents gave her birth to her only once but Parvathy has given a new lease of life twice. She tells everyone that when she has Parvathy by her side, she has no reasons to worry. Thus, Akhilandeshwari embraces Parvathy once again. Continue to read to know what happened tonight.

The blackmailer, who has threatened Mithra in the past on several occasions, calls Nandhini to tell her to mend her ways or face the consequences. He tells her not to harm the Adhikadavurs, and if she refuses to do so, then he will become the cause of her death. Nandhini initially dismisses his threats but eventually realises that he means what he says. To avenge the attack on Akhilandeshwari, the blackmailer cuts the break of Nandhini’s car. As as result, Nandhini loses control of her car and collides against a wall.

A while later, the blackmailer calls Mithra to tell her to visit the hospital where Akhilandeshwari is admitted. He tells her to visit at the earliest because she has a surprise in store out there.

Meanwhile, Akhilandeshwari gets discharged from the hospital. As she remains seated on a wheel chair, Parvathy gently pushes it towards the exit door with other family members in tow. Mithra, who reaches the hospital in a hurry, wonders what the blackmailer intends to show her. Eventually, she sees Nandhini lying unconscious on another wheel chair, and being taken to a ward for treatment. The moment she sees Nandhini in such a condition, Mithra feels the jitters but she behaves as if it doesn’t matter to her.

If You Have A Sweet Tooth Like Karthick Vasu, Know How To Make Gulab Jamun At…

And when Akhilandeshwari gets back home, she is happy to see her staff greeting her with much love and respect. After breathing a sigh of relief, Akhilandeshwari tells Adithya to get back to London until Paurnami but he refuses to go. He says that he will take care of himself and let no evil get closer to him. Thus he convinces Akhilandeshwari, who seems to have developed a stronger bond with Parvathy. Akhilandeshwari thanks Parvathy for saving her and showers blessings on her. Keep watching Sembaruthi, and for more entertainment, check out Nachiyarpuram, a show starring real-life couple Dinesh and Rachitha, on ZEE5.

Yamuna Chinnadurai In Kerala: Things You Must Do When You Visit 'God's Own Country'