Sembaruthi 29 August 2019 Preview: Aishwarya To Ask Parvathy Why She Agreed To Marry Adi

In today's episode, you will see Aishwarya confronting Parvathy for agreeing to marry Adithya. 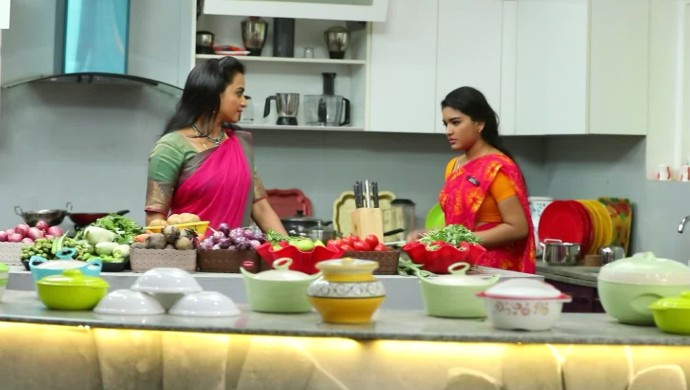 In yesterday’s Sembaruthi episode, we saw how Aishwarya reacted after knowing the truth about Parvathy and Adithya’s marriage. Arun, who eventually revealed that Adithya and Parvathy are married, requested her to save the couple by removing their pics from the locket attached to the Adhikadavur ancestral chain. But will Aishwarya cooperate and extend her support to them?

In today’s episode, you will see Aishwarya confronting Parvathy for agreeing to marry Adithya. She asks her why she allowed him to put the mangalsutra around her neck. She also wishes to know how does she thinks she is worthy of matching Adithya’s caliber and status. Interestingly, she questions her in the presence of Arun and Adithya in the garden area.

What will Parvathy say and how will Arun and Adithya react to Aishwarya’s angry outburst? For those who joined in late, here’s a summary of the last few episodes. Aishwarya feels grateful towards Parvathy for saving her from Akhilandeshwari’s wrath after she claimed Arun’s share in the business. However, one day, she sees Parvathy wiping Adithya’s mouth with the pallu of her saree. This gesture of Parvathy for Adithya makes Aishwarya wonder about their relationship.

Later, she spots Parvathy relishing the gulab jamuns that were left half-eaten by Adithya. Her doubts grow stronger, and she tells Arun to disclose the truth to her. But Arun evades answering her question. Hence she decides to find out what reality is. And when she visits the outhouse to meet Parvathy, she finds a lamp similar to the one Purushothaman had gifted to her. And when she recalls him saying that the other lamp is for his elder daughter-in-law, she realises that there’s more to Adithya – Parvathy’s relationship than meets the eye.