After learning about Mithra and Nandini’s relationship from Parvathy, Vadivel decides to spy on the latter and bring some relevant proof. 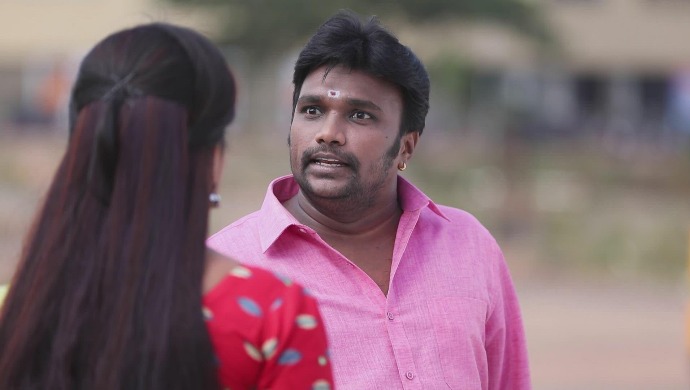 In the previous episode, after completing work at the registrar office, Nandini and Vishu are on their way back to office, when he tries to send the evidence to Adi. However, he is unable to do so due to network issues. Nandini learns about Vishu’s background and sends her goons to beat him up. She then breaks his phone and kidnaps him too, so that he cannot reach Adi. However, Adi has placed a tracker on Vishu’s wallet, that helps him figure out where he is. Adi sends cops to Nandinin’s warehouse to save Vishu. Meanwhile, Akhila wants to start with the wedding preparations as she thinks it’s high time. But Adi is not interested to shop for the wedding and asks Akhila to do it on her own.

Tonight, Akhila prods Adi to join him for the wedding shopping. However, he declines the offer, saying that he doesn’t wish to go anywhere as he has some prior commitments. Akhila wonders if there is a double entendre in the statement and whether he is talking about Parvathy when referring to a prior commitment. Hence, she prods him for more details. Noticing how the conversation is going, even Vanaja tries to intervene and add fuel to the drama. However, Adi politely refuses to be part of the shopping and walks out of the living room.

Later, Akhila confronts Purushottam about Adi’s behaviour and states that she doesn’t want anything to change her plan of getting her son married to Mithra. He tells her that she shouldn’t doubt people or even Adi for that matter. This only infuriates Akhila, who claims that Purushottam is hiding something from her and that she will find out everything in due time.

Vadivel is at the park when he meets Parvathy. He talks about Mithra and how gets bad vibes from her, when Parvathy reveals to him that Mithra is evil. She further adds that Mithra is Nandini’s sister, who is trying to get married into the Adikadavur family to seek revenge. He gets emotional and says that he will try to get some proof and stop the wedding. Parvathy tries to stop him but in vain.

Vadivel reaches Nandini’s place but doesn’t know how to approach the house or get proof. Just then an AC mechanic arrives. Vadivel takes this as his opportunity and enters the house as his associate. Nandini notices them, especially Vadivel, and is not convinced that he is the AC mechanic’s associate. She keeps staring at him while he is nervous, thinking that she might find out about him.

Nachiyarpuram Is Packed With Action And Romance, Watch Promo Of The New Show

Nayanthara, Jyothika – Check Out The List Of All Actresses Nominated For…