Sembaruthi 29 July 2019 Preview: Vanaja Agrees To Work As A Maid At The Adhikadavur House

Vanaja, who accepts the job of a maid at the Adhikadavur residence, washes heaps of clothes with her hands. 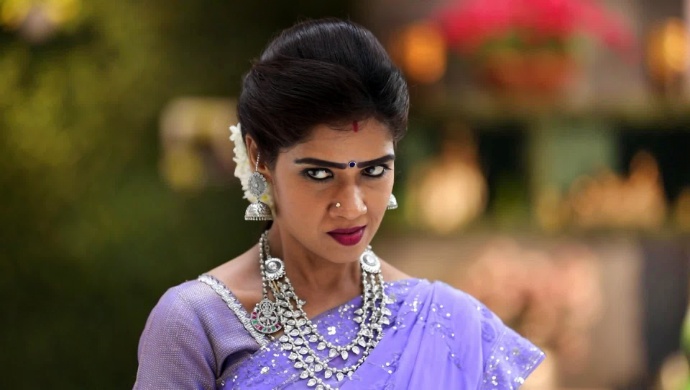 Adithya, who has proved Vanaja’s involvement in the Adhikadavur chain case, leaves for Mumbai wondering why Parvathy isn’t attending his calls. For the unversed, Sundaram requests Parvathy not to be the cause of a rift between Adithya and his mother (Akhilandeshwari). To honour her father’s request, Parvathy makes up her mind to stop talking to Adithya. Meanwhile, Akhilandeshwari asks Vanaja to either work as a maid or leave the country. Vanaja, who wants to avenge Akhilandeshwari at all cost, refuses to go abroad. You can expect a lot of fun in today’s episode of Sembaruthi.

Vanaja, who accepts the job of a maid at the Adhikadavur residence, washes heaps of clothes with her hands. She gets annoyed with the circumstances that have compelled her to give up the comforting luxuries. Though her niece Uma helps her, Vanaja knows she has invited trouble and nothing else by agreeing to work as a domestic help.

For the unversed, Vanaja hatched a plan to accuse Sundaram of fraud by replacing the Adhikadavur chain with an identical fake piece of jewelry. She wished to see Sundaram getting humiliated by Akhilandeshwari. Her sole motive was to see him leaving the Adhikadavur residence along with his daughter Parvathy. But how could Adithya remain calm when his wife and his father-in-law were in trouble. He laid a trap to make Vanaja admit that the chain was in her bank locker. Thus, he exposed Vanaja’s conspiracy and saved Sundaram and his family. Now, Vanaja is serving the punishment for committing the crime.

If you are a fan of Tamil TV shows, watch Yaaradi Nee Mohini, a supernatural drama, on ZEE5.