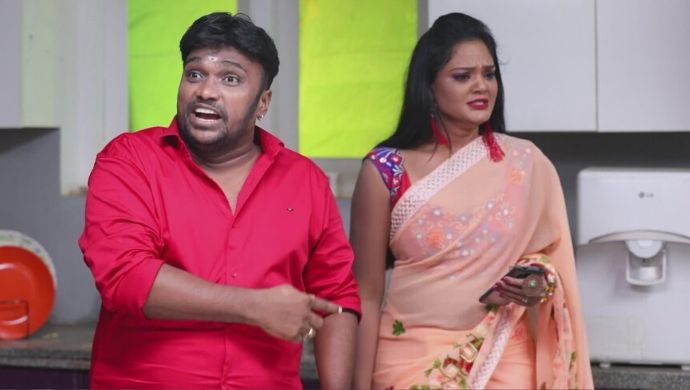 In the previous episode, Nandini slaps Mithra and blames her for losing the Goodwill Ambassador elections to Parvathy. She tells her that this was a golden opportunity to destroy Akhilandeshwari. Mithra blames it on Adithya instead and the blackmailer. While Vanaja is of the opinion that Adithya is the blackmailer, the other two beg to differ. Later on, Vanaja’s cousin, Vadivel comes to visit them and stay there for a coupl of days.

Vadivel is pleasantly surprised to see what a big house Akhila and Vanaja live in. He tells Vanaja that he is really hungry and she asks him to go ask the cook to make something for him. When he manages to find the kitchen, he sees Mithra taking out a bottle of juice and mistakes her for a cook.

He even asks her to make something for him and the two start arguing. Parvathy enters and silently laughs at the whole thing rather than interrupting. Vanaja also enters and clears all the confusion. After all of them leave, Parvathy calls Vadivel ‘Anna’ and he gets emotional. She also cooks for him and he loves her food. He tells her that it reminded him of his mother.

Later on, Parvathy is watering the hibiscus plants and talking to them. Just then, Adithya enters and schools her about her responsibilities as a Goodwill Ambassador. She learns everything from him and he also tells her that he will not be able to attend her first meeting so she will have to make sure that her speech impresses Akhilandeshwari.

Police Diary 2.0 Episode 9 &10 Review: Danush Throws Light On College Politics In This One