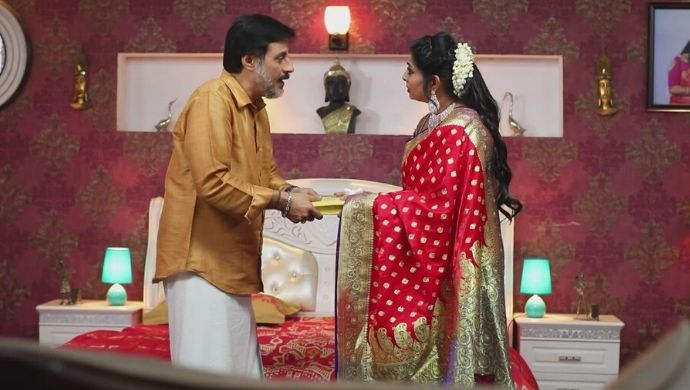 In the previous episode, Sundaram calls Adithya over for the thala deepavali festivities. He also gives Parvathy a list of things that Adithya loves to eat and asks her to prepare those. Parvathy is happy to see her father come around and accept their marriage slowly. Adithya comes over to celebrate thala deepavali and enjoy a delicious meal prepared by her. Meanwhile, Vanaja and gang are eagerly waiting for the sweet box at Parvathy’s house to explode. Akhilandeshwari is bursting crackers with the rest of the family.

Vanaja is talking to Mithra and wondering why the sweet box hasn’t exploded yet. Mithra worries about Adithya but Vanaja only mocks her asking her to stay still. She reminds Mithra why Nandini actually sent her to the house and asks her to not fall in love with Adithya. At the outhouse, Adithya and Parvathy seek blessings from her late mother before they start eating. They have a gala time with each other as they sit and eat like a family. Adithya asks Sundaram to sit with him and eat. Parvathy gets emotional on seeing everyone together.

Vanaja and Mithra are restlessly waiting for the sweet box to explode. To not arouse any suspicion, they leave from there and decide to come back whenever they heart explosion. Adithya bids farewell and thanks Sundaram, who tells him that he can’t let him go without any sweets or gifts. Ganesh goes and gets the sweet box that was given to Parvathy and Sundaram scolds him but Adithya takes it home with him.

At home, Adithya talks about everything that happened to Purushothaman. He sees the sweet box and immediately takes the sweet box from Adithya since he has a sweet tooth. No matter how much Adi refuses, Purushothaman takes it from him anyway. He tries to snatch it from Adi’s hand who hands it over to his father anyway, asking him to not hog the entire thing.

Purushothaman goes to his room and is about to open the sweet box but he decides to first check if Akhilandeshwari is nearby or not since she won’t let him eat it. He sees her coming and is looking for a place to hide it. He hides it near his bed and Akhila sees him. She asks him what he is doing and asks if his health is okay.

He takes the sweet box out once she is out of sight but she comes back just when he is about to open the box. She stops him and scolds him. She asks him to hand over the box to her and he pleads for her to let him have at least one sweet. They start snatching it from each other. She takes the sweet box away.

Arun and Aishwarya are discussing Parvathy and Adithya’s thala deepavali. Akhila overhears Arun saying that they will celebrate Adi’s thala deepavali in a grand way next year. She asks them what they were talking about. For more such entertainment, watch Oru Oorula Oru Rajakumari streaming on ZEE5.

#WomanCrushWednesday: Janani's Traditional Looks Will Make You Revamp Your Closet