Adithya tries to tell Akhilandeshwari the truth about the murder attempt but Parvathy stops him with a look and she pleads him not to tell the truth. 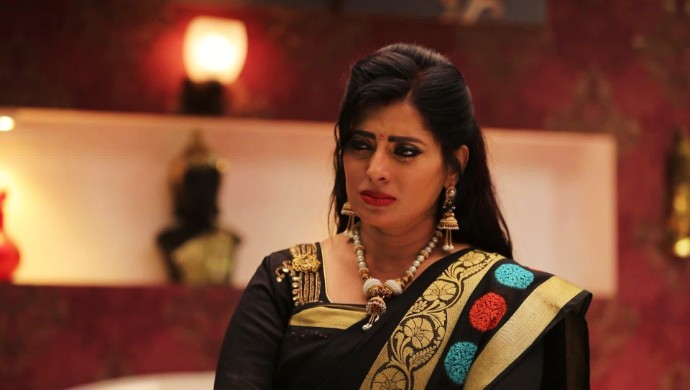 In the last episode of Sembaruthi, we see that Sundharam scolds Parvathy for having stood near Adithya on the stage. He later asks her to stay away from him. Later, Adithya asks Arun and Shyam to take Sundharam along with them so that he can go and meet Parvathy. So, he very cleverly avoids Uma and goes out of the house in his car. And later slyly parks the car and walks into Parvathy’s house. There with the help of Ganeshan, he prepares tea for Parvathy, without her knowledge and he makes Ganeshan ask some funny question to Parvathy.

In today’s episode, we see that Uma sees Ganesham walking into the house from outside and she is surprised because earlier she had spoken to him in his house. So, she decides to confront him but he somehow manages to confuse her and manage the situation. Later, when she sees Adithya coming from the side of the outhouse she is further surprised and Adithya on his part again confuses her.

Meanwhile, Mithra is worried about that fact that Akhilandeshwari will get to know about the murder attempt she and Vanaja made on Parvathy’s life. Vanaja pacifies her saying Parvathy will never inform this to Akhilandeshwari. Further, Vanaja asks Mithra to make a coffee and take it to Akhilandeshwari in order to impress her, so Mithra does accordingly.

Vanaja and Mithra heave a sigh of relief and they are happy. But Adithya tries to interfere in between and tries to tell Akhilandeshwari the truth about the murder attempt but Parvathy stops him with a look and she pleads him not to tell the truth. So, Adithya also lies and manages to sugar coat the truth.

So, what do you think will happen? Will Akhilandeshwari come to the truth about this incident?

Birthday Special: 5 Movies Of Trisha That You Must Definitely Watch Today