Parvathy unsuspectingly picks up the glass and drinks from it, while Vanaja waits in anticipation for a result. In some time, Parvathy feels dizzy. 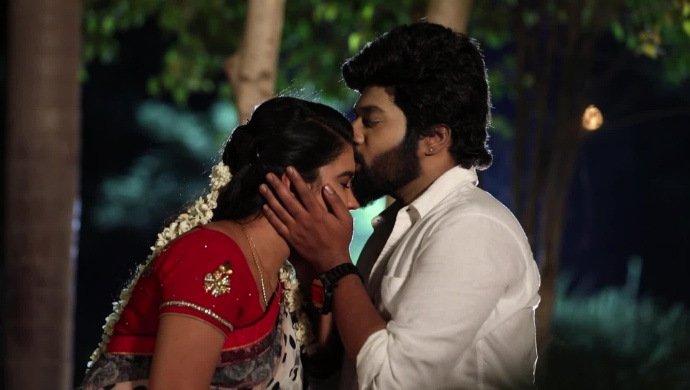 In today’s episode, we see that Vanaja is mixing some kind of a powder in a glass of juice in order to drug Parvathy. She somehow manages to send that glass of juice with a waiter to Parvathy. Parvathy unsuspectingly picks up the glass and drinks from it, while Vanaja waits in anticipation for a result. In some time, Parvathy starts to feel the effect of the drug and she feels dizzy.

Further, Vanaja takes her out of the hall so as to avoid any interference, she then makes her sit in the back of a car and switches on the air conditioning in an attempt to further torture Parvathy and kill her by extreme cold. Meanwhile, Adithya feels that something bad is going to happen to Parvathy and he is worried. In the meantime, Vanaja goes to fetch Mithra and she tells her about the plan that she is executing.

Somehow Adithya manages to find the car where Vanaja has locked Parvathy, he tries to open it but finds it locked so he breaks open the window and saves her. After that, he asks her about how she got locked in the car. So, she narrates how after drinking the juice she felt dizzy and how she saw Vanaja after that. This makes Adithya doubtful and he finds Mithra and Vanaja lurking around the car.

In his anger he slaps Mithra and warns her and Vanaja to stay away from Parvathy, saying so he leads her away and later calls a doctor to check on her status. Only when the doctor says that everything is fine with Parvathy, Adithya heaves a sigh of relief.

So, what do you think will happen? Will Mithra and Vanaja make another attempt at Parvathy’s life?

Also, if you have not yet watched the show Iniya Iru Malargal do watch it on ZEE5.