What happens to the box of sweets with the bomb in it. Will Vanaja's plans have serious consequences this time? 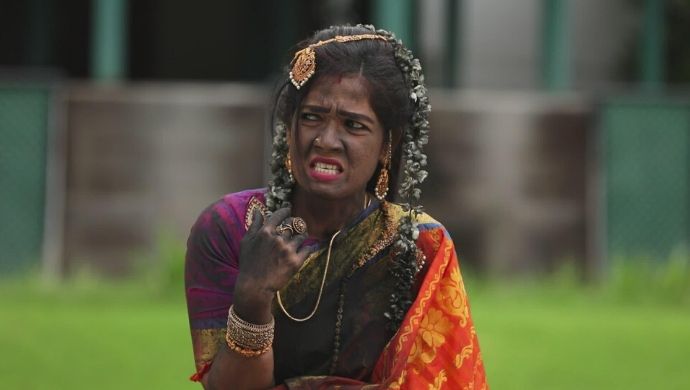 In the previous episode, Vanaja successfully hands over the box of sweets with the bomb in it to Parvathy. However, the sweet box ends up in Adithya’s hand as a farewell gift from Sundaram who calls him over for Thala Deepavali. Purushothaman takes the box of sweets from Adithya to have it secretly in his room. Akhilandeshwari catches him and they start a tussle for the box. She takes it away from him and goes to Arun’s room to give it to him when she overhears them discuss Adithya’s thala deepavali.

Watch the episode here, in case you missed it.

Arun and Aishwarya tell Akhilandeshwari that they were talking about how it could have been Adithya’s thala deepavali this year had he gotten married and somehow save the situation. Akhila then hands over the sweet box to them, complaining about Purushothaman. They keep the sweet box in a drawer.

Purushothaman goes to the outhouse to complain to Parvathy about Akhila and requests her to make some sweets for him. She makes some healthy, sugar free dessert for him and he wishes her a lifetime of happiness. He also thanks Sundaram for making Adithya’s thala deepavali so special.

Vanaja and Mithra, on the other hand, are wondering why they haven’t heard an explosion yet. They decide to use the remote and Mithra tells her that they should do so in the garden so they can watch it. Excitedly, both of them go to the garden and look for the best spot. Mithra finds her spot from where she wants to see the explosion and Vanaja is seen trying to find the right spot from where she can press the button. She finally finds the spot and clicks the button but the explosion happens right where she is standing.

Mithra and Uma come rushing to help her. That’s when Uma tells her that she found the sweet box in Arun’s room and took it to her room. Upon finding out from Vanaja and Mithra that it has a bomb in it, she hurried from there and kept it somewhere in the garden and that’s where Vanaja stood. Vanaja scolds her daughter-in-law and asks Mithra to take her to the hospital.

Later at night, Adithya and Parvathy are seen talking about how well thala deepavali went and assure each other that they will celebrate it with the entire family next year.

#ThrowbackThursday: This Picture Of Archana Chandhoke And Baby Zaara Is Too Adorable