Arun takes Shailaja to a hospital for the DNA test. Shailaja cooperates with him during the test and he fears that she could be telling the truth. 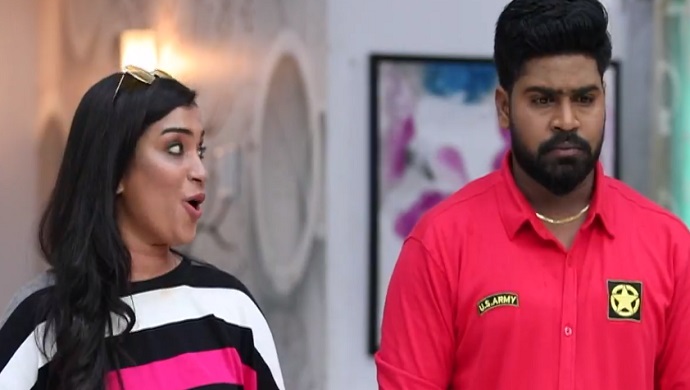 In today’s episode of Sembaruthi, Parvathy will extend support to Arun, after he lands in a dilemma. To know what happened tonight, read on. Shailaja, who visited Akhilandeshwari’s mansion yesterday along with her toddler son, has irked Arun. He wonders why is she back in his life and wishes to speak to her. Today, when he asks her about the purpose of her visit, she says that the child belongs to him.

Arun, refuses to believe her. However, he gives her the benefit of the doubt. He tells her that he is no longer the old Arun, who was reckless. He explains to her that he is now a committed man and is happily married to Aishwarya. When Arun and Shailaja discuss their past, Parvathy overhears their conversation. Later, after seeing Arun look disturbed and worried, Parvathy approaches to talk to him on the pretext of giving him a cup of tea. Parvathy tells Arun that she overheard his conversation. She says that she wishes to know if the child belongs to him. Arun admits that he was in a relationship with Shailaja, but broke up with her after knowing that she was dating other men. Hence, Parvathy suggests that he must get a DNA test done to know if Shailaja is telling the truth.

Arun takes Shailaja to a hospital for the DNA test. Shailaja cooperates with him during the test and he fears that she could be telling the truth.

Meanwhile, at the association, Nandhini wishes Akhilandeshwari by offering her sweets. She says that Akhilandeshwari has been chosen as a member of the planning commission by the central government. However, she is determined to embarrass Akhilandeshwari when she receives the honour, by humiliating her family.

To know what happens hereafter, continue to follow Sembaruthi, and for more entertainment, check out Nachiyarpuram, starring real-life couple Dinesh and Rachitha, on ZEE5.

Sembaruthi 31 August 2019 Preview: Arun To Get DNA Test Done To Know The Truth