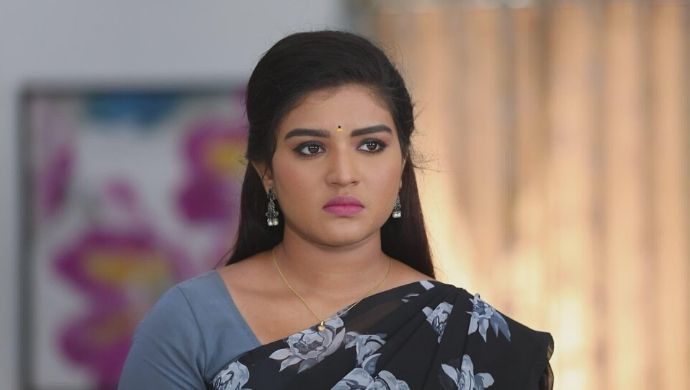 In the previous episode, the sweet box with the bomb in it that Vanaja smartly hands over to Parvathy somehow comes back in the house. Vanaja and Mithra decide to use the remote to explode it since they don’t hear a blast. But thanks to Uma and her gluttonous ways, the sweet box lands right where Vanaja is standing to explode it. Mithra takes Vanaja to the hospital and ponders over the failure of their plan. Akhilandeshwari, on the other hand, tells Arun and Aishwarya that she will get Adithya married this year.

Adithya comes home and asks Parvathy to get pudina tea to his room, which is sort of their code word to spend quality time together. She excitedly takes it to his room. Mithra sees her take the tea to his room and fumes. Parvathy and Adithya spend some romantic time with each other in the room and even take a couple of selfies with each other. Mithra decides to confront Parvathy when she is out of the room. Parvathy leaves the room and is stopped by Aishwarya who reminds her to hide her thaali and also warns her saying that Mithra is coming her way.

Later, Mithra calls Parvathy rudely and is shocked to hear Parvathy reply in the same way. She demands to know what Parvathy was doing in Adithya’s room for so long. Parvathy tells her that they took a couple of selfies and spent quality time with each other. She also tells Mithra that she will make sure she is out of the house soon enough. The two get into a heated argument over it when Mithra gets a call from Nandini. Mithra cuts short her fight and storms out to answer the call leaving.

Nandini asks Mithra to steal some important documents from Akhila’s laptop so they can use it to destroy the family. She even finds out what Akhila’s laptop password is and Mithra agrees to do it. Parvathy overhears their conversation and decides to tell Adithya about it. At night, she discusses all of this with Ganesh. She tells him that Adithya left for Hyderabad for some work and has asked her to stop Mithra. Ganesh tells her that this is a good opportunity for her to gain Akhila’s trust. Parvathy decides to stop Mithra.

The next morning, Parvathy sees Mithra hovering around Akhila, who is working on her laptop. Akhila gets a call and shuts her laptop, leaves it on the table and goes to the garden area to speak. Mithra grabs the opportunity and tries to get her hands on the confidential information. Parvathy immediately rushes outside and lies to Akhila saying that Purushothaman has called her. Akhila walks back in and Purushothaman is also seen entering the living room area from his room. Will they catch Mithra red-handed? For more such entertainment, watch Piriyadha Varan Vendhum streaming on ZEE5.

Sembaruthi 31 October 2019 Preview: Parvathy To Get Into A Fight With Mithra?