Akhila asks a physically-challenged person to check the CCTV footage where Adi told her everything. 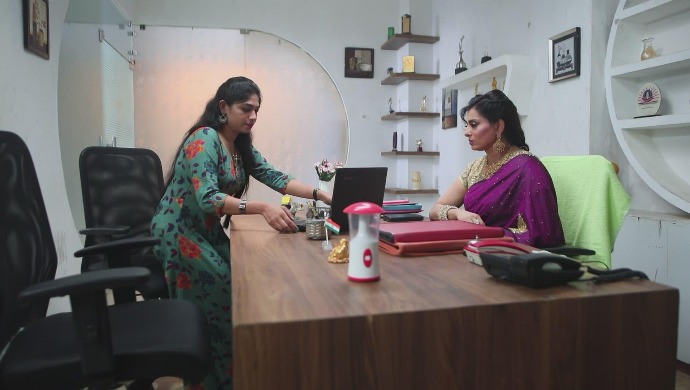 In the previous episode of Sembaruthi, the orders are not up to the mark and Akhila lashes out at Parvathy. Unable to comprehend how the order’s quality got compromised, Parvathy asks for four hours from Akhila to solve the issue. As Parvathy clears her mind , she comes up with a solution to alter the design of the order. Meanwhile, Vanaja asks her to submit her resignation as she couldn’t complete the order. But Akhila stops her as she receives a call from the Canadian client, who states that the design idea is brilliant. While Akhila is surprised with Parvathy’s quick wit, Vanaja and Nandini’s final plan to spoil their relationship goes down the drain.

Tonight, Akhila states how the Canadian client is very happy with the order. She praises Parvathy for proving herself and leaves. Arun, Purushottam and Aishwarya congratulate her on such a big win. Later that night, Adi also congratulates Parvathy for ensuring that the order is a success. He informs her that 70 per cent of the work has been completed and he should be back soon. Nandini meets with an anonymous person to hire him.

The plan is to use his help to destroy Akhila and her family. She arrives at a lonely place with money to give to him. The man comes out of the shadows to check the money. Nandini speaks to him later and asks him if he works for her now. She also asks if he is still Adi’s employee. As he states that he is only her employee, Nandini asks him to harm Parvathy, Adi and Akhila. However, the man refuses to do it as he has a very strong moral ethic. He believes that he should never harm good people. Nandini is furious as she has already paid him more than a crore for the job.

The man continues to stand by his word. In fact, he actually calls himself a sort of Robin Hood who takes or rather steals money from the rich to help the poor. At Akhila’s office, two individuals from the deaf-and-mute institute arrive to ask for donations. The physically-challenged girl notices that Akhila is busy and heading to a meeting, so she decides that they should come back later. However, Akhila is interested in the girl as she thinks that she can help her out. The girl agrees to help her and walks into Akhila’s cabin. There, Akhila explains that she has a CCTV footage and needs to know what Adi told her when she was in the hospital. The girl starts writing whatever Adi told her in the video and Akhila’s expression changes.

If you are new to the series, here are some important details you should know about. Adithya, the heir of a rich family, is secretly married to Parvathy, his cook . The biggest obstacle to their happiness is Adithya’s mom, the strict and demanding Akhilandeshwari, who has different notions of what her daughter-in-law should be like. She has no idea about her son’s marriage, and Adithya and Parvathy are waiting for the right moment to tell her.

D7: The Friendship Between Sachin and Bharat Needs A Special Mention

Do Not Miss Mersal On ZEE5, Where Vijay Plays A Triple Role!

Sembaruthi 4 January 2020 Preview: Akhila To Find Out About Adi-Parvathy’s Marriage?