Adithya knows that his father wants him to bring Parvathy home as the daughter-in-law of the house. But how will Adithya explain this issue? 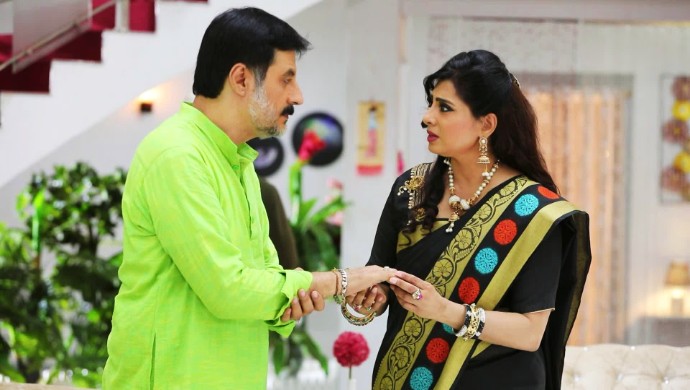 Will Adithya reveal what is bothering his father? Adithya knows that his father wants him to bring Parvathy home as the daughter-in-law of the house. But how will Adithya explain this issue to his mother? Vanaja wants to get Mithra married to Adiitha by hook or crook. So, to ruin his plan, Vanaja hatches a plot. She has taken Akhilandeshwari’s approval to let Mithra perform the Munnoorgal Puja for the Adhikadavur ancestors.

Adithya, who doesn’t want Mithra to do the Puja, asks Parvathy to perform it secretly in his room. He makes all the necessary arrangements for the Puja by placing the walking stick, footwear and a photograph of one of his ancestors inside his wardrobe. He converts his closet into a temple to help Parvathy perform the Puja without getting caught by anyone in the house.

In Thursday’s episode, Parvathy luckily escaped Akhilandeshwari’s wrath by using her presence of mind. Akhilandeshwari visits Adithya’s room to check a file, and she gets shocked to see Parvathy is her son’s room. Akhilandeshwari reprimands Parvathy for being there and asks her to focus on her primary job that is cooking.

Parvathy fears when she couldn’t get Akhilandeshwari’s approval to visit Adithya’s room, how will she get her acceptance to be a part of the family.