Arun tries to gauge Aishwarya's emotions with regards to Adi and Parvathy's relationship. 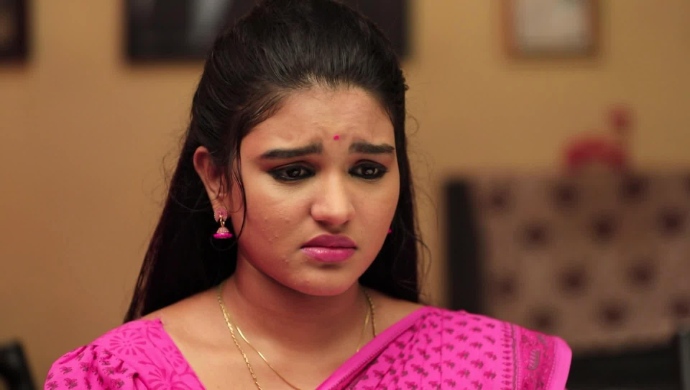 In the last episode of Sembaruthi, we saw that Adithya makes Pattama lie to Sundharam that she has come to keep Parvathy company. When Sundharam goes out. Adithya walks in and says that he is going to take Parvathy out to the garden. So, Adithya picks her up and takes her to the garden. In the garden, Adithya gives her a wheelchair and says that now she can roam around freely, sitting on that chair. Incidentally, Akhilandeshwari who is going out somewhere sees Adi and Parvathy together. Adi who sees this tries to control the situation and directly goes to speak to Akhilandeshwari and in a sly manner and changes the topic.

In today’s episode, we see that Mithra and Vanaja are not happy with the events that happened in the house. They are angry with Adi because of the trick he used to save himself. This makes them think even further to devise a plan to thwart Adi and Parvathy. Vanaja explains to Mithra and Uma how she will manipulate Akhilandeshwari by using the same astrologer’s prediction about Parvathy and Adi’s marriage.

Meanwhile, we see that Sundharam is angry with Parvathy, as he did not like the fact that Adithya had come to meet Parvathy in his absence. He also speaks about his fears with regards to Akhilandeshwari’s unpredictable behaviour. He warns her to stay away from the issues and also Adithya. Saying this he walks out angrily but Ganeshan who was standing there all the while goes and gives Parvathy some support.

In the meantime, Arun tries to gauge Aishwarya’s emotions with regards to Adi and Parvathy’s relationship. So, he asks her opinion about Mithra and then asks her if she thinks Mithra is good enough to become Adi’s wife. When Aishwarya replies honestly and says that Mithra does not seem the type who would suit Adithya’s family and legacy, then Arun tries to further question her, in hopes that she would take Parvathy’s name. But Aishwarya refuses Parvathy’s eligibility by saying that her socioeconomic status is less than Akhilandeshwari.

On the other hand, we see that Nandhini is making some evil plan with one Mr Senthil, she bribes him and asks him to do something, which is supposed to be harmful to Akhilandeshwari’s image. At the same time, we see that Vanaja and Uma are waiting at the house entrance for Parvathy, in hopes of creating some issue for her. But when Parvathy walks closer, we see that Aishwarya suddenly shouts from behind and asks Parvathy to stop from entering the house.

So, what do you think happened to Aishwarya? Why is she suddenly shouting at Parvathy?