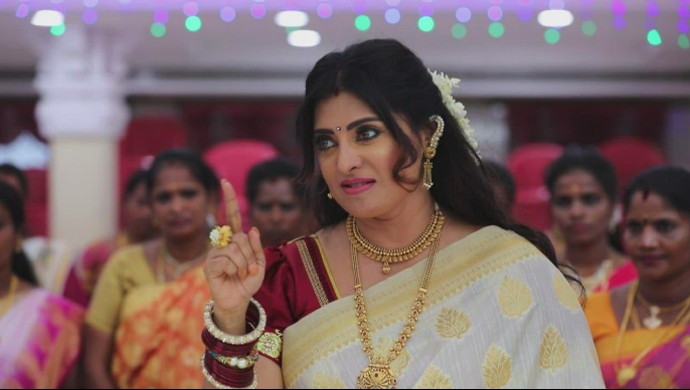 In the previous episode, we saw that Adithya and his father, Purushothaman, had planned to reveal the truth to Akhilandeshwari while attending a wedding in the family, hoping that the occasion would put her in a good mood and more receptive to the news that her son was married to the Parvathy, the cook in her household. However, Adithya was dispatched to represent the family at their accountant’s daughter’s wedding, so it now fell to Purushothaman to tell Akhilandeshwari.

If you have missed watching the previous episode, then you can catch it here.

Akhila’s sister, Vanaja, however, had no intention of making things so easy for the Adhikadavur family. Right through the wedding ceremony, she tries hard to poison Akhilandeshwari’s mind by playing up her pride for family name and honour. She points out that Akhila is not receiving sufficiently royal treatment despite her position in society, but her sister seemed unaffected by it. Desperate to spoil her sister’s mood, Vanaja points how the bride has much lesser stature and wealth than the groom, who is a relative of the Adhikadavur family. Her sister responds by handing over an expensive gold necklace to the bride as a wedding gift. While Vanaja despairs that Akhilandeshwari has permanently changed for the better, Purushothaman is delighted with the transformation and decides that the time is right to tell her about Adithya.

Just then, the parents of the bride and groom come over and insist that Akhilandeshwari must bless the mangalsutra and hand it out to the groom for the typing the knot. To Vanaja’s delight, this enrages Akhilandeshwari who throws the mangalsutra and points out that despite the groom spoiling the Adhikadavur name by marrying a girl of lower station, she was perfectly happy to attend the wedding since the parents had agreed to the match. However, she was not willing to be a part of the actual ceremony and did not like being forced to do so. She rounds off with a declaration that she will never allow anyone in her own family to besmirch the family name by marrying someone of a lower station. Thus, after creating a scene, she walks out.

This doesn’t bode well for the fate of Adithya and Parvathy? Will Parvathy’s act of saving Akhilandeshwari’s life be sufficient for old matriarch to bless her son’s union? To know more, watch Sembaruthi every night online on ZEE5.

If you like watching such family dramas, don’t forget to watch Poove Poochoodava, streaming on ZEE5