Arun's ex girlfriend Shailaja has returned to his life, claiming that he is the father of her child. He believes that she has returned with a purpose. 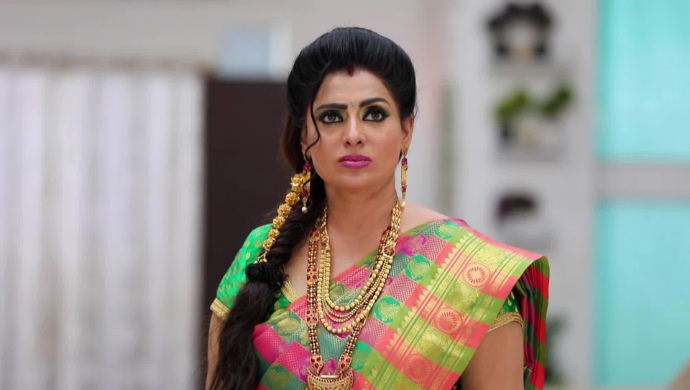 When Arun learnt about the DNA test report, he feared that his mother might either kill him or shoot herself. And in today’s episode of Sembaruthi, Arun’s fear may manifest into reality. Nonetheless, it looks likely that Arun dreams about getting shot by his mother.

Arun’s former girlfriend Shailaja has returned to his life, claiming that he is the father of her child. Hence, he undergoes a paternity test to know if Shailaja’s claim is valid. Read on to know what happened in the last few episodes since Shailaja’s arrival. As expected, Nandhini hatches a plan to ruin Akhilandeshwari’s image and reputation by targetting Arun. Earlier, she tried to create a rift between Arun and Adithya by making Aishwarya claim her husband’s share in the business. And now, she has used Arun’s ex-lover to trap him.

Shailaja enters the Adhikadavur residence on the day of Gokulashtami to execute Nandhini’s plan. The moment Arun sees her, he gets shocked as his relationship with her ended on an unpleasant note. Moreover, he is now happily married to Aishwarya.

Arun believes that Shailaja has returned to his life with a purpose. Later, she claims that he impregnated her when they were in a relationship. And now, she wants him to secure her and her child’s future. She asks for monetary help from Arun and thus succeeds in following Nandhini’s instructions.

Thankfully, during this phase, Parvathy extends support to Arun by giving him the much-needed moral support. After sensing that Shailaja is narrating a fabricated story, Parvathy checks her room to find evidence to confirm her doubt. And she finds a cheque of Rs 15 crore issued to her by Nandhini. Thus, she alerts Arun about it and saves him from falling in Nandhini’s trap. Follow Sembaruthi and for more entertainment, check out Nachiyarpuram, a show starring real-life couple Dinesh and Rachitha, on ZEE5.

How Does Siva And Bharati's Love Story Stand Out In Rekka?