When Akhila visits the association, Nandhini takes a jibe at her and informs her about Arun and Shailaja's child. This news angers Akhila. 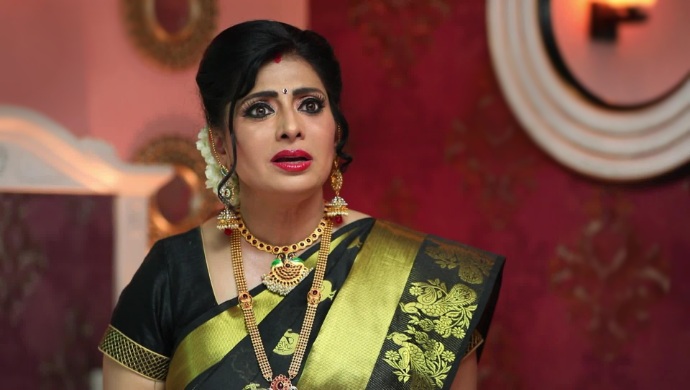 In today’s episode of Sembaruthi, Arun’s fear manifests into reality. Both Adithya and Akhilandeshwari learn about Shailaja and her child. Read on to know how the episode unfolded. The episode begins from the point where it ended last night. Arun leaves the coffee shop without handing over the money to Shailaja. After he goes away, Nandhini wonders who called him up and why. Shailaja tells Nandhini that Arun has learnt about her real intentions and has hence decided not to dance to her tunes. Nandhini feels that she missed the chance of taking his pics while giving Shailaja the bag full of cash. However, she thinks that she has an opportunity to shame him by calling the media.

Later in the day, when Akhilandshwari visits the association, Nandhini takes a jibe at her and informs her about Arun and Shailaja’s child. After knowing the truth, Akhilandeshwari heads to her mansion in a fit of rage. In the meantime, Parvathy reveals all about Arun and Shailaja’s relationship to Adithya. She feels that they must take action before things go out of hand. But the worse happens. Akhilandeshwari gets back home, fuming with rage, and calls out Arun’s name aloud. After seeing Arun in front of her, she beats him up without uttering a word as Purushothaman, Adithya, Parvathy and Aishwarya stand helplessly.

However, Vanaja, Mithra and Uma are happy to see Arun getting beaten up. Follow Sembaruthi and for more entertainment, watch Nachiyarpuram, starring real life couple Dinesh and Rachitha, on ZEE5.

#FridayFun: These Videos Of Rishi Of Piriyadha Varam Vendum Prove That He Is A Rockstar