Akhila learns about Adi and Parvathy’s affair and announces his wedding date with Mithra! How will Adi react to this? 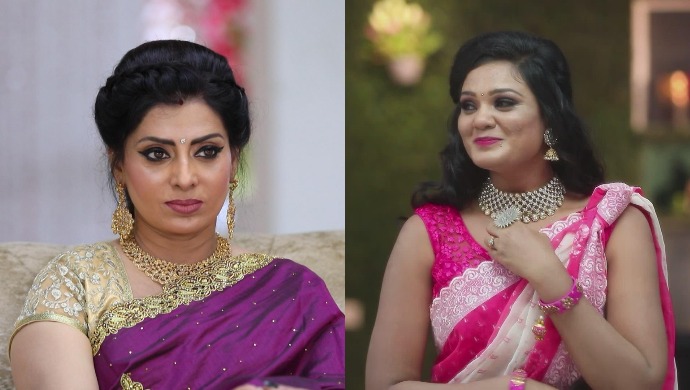 In the previous episode, Nandini tries to take help from an anonymous caller, who previously helped Mithra too. However, after taking Rs. 1 crore from her, the guy decides to not help her. She is confused and enraged by this betrayal. To this, he calls himself ‘Robinhood,’ who takes money from the rich, to help the poor. Basically, he doesn’t wish to harm Akhila, Adithya and Parvathy, as they are good people. Meanwhile, Akhila meets a deaf and mute person in her office and asks for a favour. She shows her the CCTV footage of Adi, visiting her at the hospital. The person starts to write down what Adi had said in the video.

Tonight, Akhila is busy reading whatever Adi told her. The deaf and mute person is unable to read some parts of the conversation, as she cannot see Adi’s lips. However, she does read the part about Adi admitting to be in love with Parvathy and she gets up from her seat, in shock. She thinks about the time when Vanaja told her about how Adi might be in love with Parvathy, to which Akhila strongly disagreed. While she learns about Adi being in love with Parvathy, she doesn’t know about him marrying her. Turns out, that the deaf and mute person, could not decipher the last part of the video. Akhila asks the person to leave and calls her associate to compensate her.

Then she furiously throws a glass of water on the board and leaves the office. Her car is stopped by Nandini’s, who walks up to her with a smile on her face. Akhila gets out of her car and asks her to make way. Nandini offers to speak to her but Akhila declines. She then brings up the subject of Adi and Parvathy’s love story. Nandini states that she knows about them and tells her about how she had warned Akhila to find out about it too.

Nandini then paints a picture of the consequences that will arise out of this truth. But Akhila tells her to stay out of her business. Nandini tries to be cheeky around her, by saying how her mission of bringing down the family, will probably be completed by Akhila. She asks Akhila to move the car and storms off. Back home, Arun, Aishwarya and Purushottam are discussing Parvathy’s success with regard to the Canadian bulk order. They take jibes at Vanaja, for trying to see her fail.

Just then, Akhila returns home and sits quietly on the sofa, next to Purushottam. He notices that something is wrong and asks her about it. She tells him that she has come up with a solution for the problem. Akhila tells them a story about how her friends said that making Mithra stay at their place, without getting her married to Adi, is wrong. Hence, she will get Mithra married to Adi on his birthday. Vanaja and Mithra are elated with this news, while the others are upset.

Purushottam confronts Akhila about her promise to Sundaram to get Parvathy married, on Adi’s birthday. However, Akhila doesn’t see it as a problem. Purushottam tries to stall her decision for another day, but Akhila refuses to change it. How will Adi and Parvathy handle this? Stay tuned!

Sathya: Guruji To Know The Truth About Divya?

How will Bharath as a lawyer help the three innocent women in Nerkonda Paarvai?