Aishwarya questions Parvathy and asks her how could she dare to enter the house after what she had done. 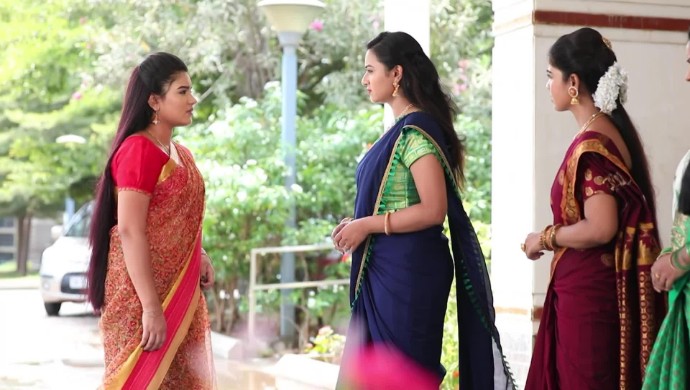 In the last episode of Sembaruthi, we saw that Mithra and Vanaja are not happy with the events that happened in the house. They are angry with Adi because of the trick he used to save himself. This makes them think even further to devise a plan to thwart Adi and Parvathy. Later, Arun tries to gauge Aishwarya’s emotions with regards to Adi and Parvathy’s relationship but it does not turn out in a way he expects it. Finally,  we saw that Vanaja and Uma are waiting at the house entrance for Parvathy, in hopes of creating some issue for her. But when Parvathy walks closer, Aishwarya suddenly shouts from behind and asks Parvathy to stop from entering the house.

In today’s episode, we will see that Aishwarya has stopped Parvathy from entering the house. Although this is what Vanaja had wanted to do all the time, Aishwarya’s sudden outburst comes as a big surprise. Vanaja stands there dumbfounded and confused. Meanwhile, Aishwarya questions Parvathy and says things like how could she dare to enter the house after what she had done. This is confusing for everyone including Parvathy, who seems lost as to what is being told to her.

So, what do you think happened? What is Aishwarya hinting at?

Binge watch from the available options of the popular Tamil movies. Also, do not forget to leave your comments in the section below.