Aishwarya asks Parvathy to spit into her hand in order to complete the evil eye warding ritual while hinting at Vanaja. 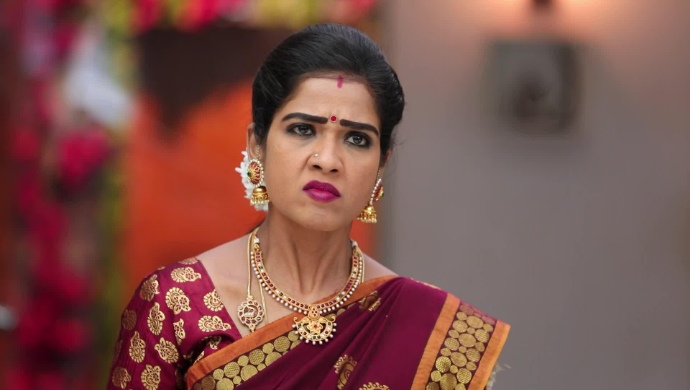 In the last episode of Sembaruthi, we saw that Mithra and Vanaja are not happy with the events that happened in the house. They are angry with Adi because of the trick he used to save himself. This makes them think even further to devise a plan to thwart Adi and Parvathy. Later, Arun tries to gauge Aishwarya’s emotions with regards to Adi and Parvathy’s relationship but it does not turn out in a way he expects it. Finally,  we saw that Vanaja and Uma are waiting at the house entrance for Parvathy, in hopes of creating some issue for her. But when Parvathy walks closer, Aishwarya suddenly shouts from behind and asks Parvathy to stop from entering the house.

In today’s episode, we see that Aishwarya stops Parvathy from entering the house. Although this is what Vanaja had wanted to do all the time, Aishwarya’s sudden outburst is a big surprise. And  Vanaja stands there dumbfounded and confused. Meanwhile, Aishwarya questions Parvathy and says things like how could she dare to enter the house after what she had done and how can she think of entering the house so easily. This is confusing for everyone including Parvathy, who seems lost as to what is being told to her.

But we see that Aishwarya then calls in Pattamma who brings in a plate to perform the ceremony of aarti for Parvathy. This further surprises Vanaja and she is not happy with these events but what comes as a big shock for her is when Aishwarya asks Parvathy to spit into her hand in order to complete the evil eye warding ritual while hinting at Vanaja. Vanaja feels insulted because of this and she recollects these incidents to Mithra. Later when Uma further instigates Vanaja, she takes out her anger on Uma.

Later, that night we see Parvathy goes to meet Adi but he seems to be distracted with some office work. So, she leaves him alone but in some time, she is worried about him because she feels that he might not have gone off to sleep. Thus, she sneaks into Adi’s room to check on him but incidentally, Mithra sees this and she is doubtful.

So, what do you think will happen? Will Mithra create an issue out of this?

Have you checked out the section of international movies available on ZEE5? If not do check it out.