Sembaruthi 6 November 2019 Preview: Vanaja Stopped From Being A Part Of The Puja 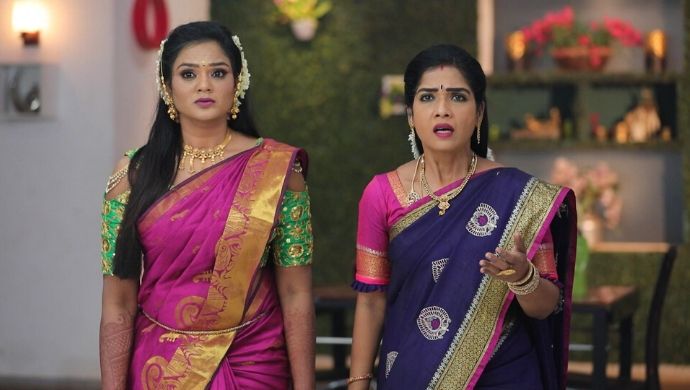 In the previous episode, Akhilandeshwari confirms via the hospital’s CCTV footage that Adithya did visit her when she was lying unconscious and he also poured his heart out. Vanaja, who accompanies Akhila is excited to see all the drama unfold. She instigates Akhila to confront Adithya about whether he visited her at the hospital and what he spoke to her that day. Adithya tells her that he will tell everyone the truth on his birthday. Although it makes Akhila more restless, she is ready to wait till his birthday. The episode ends with Guruji entering the house the next day.

In the upcoming episode, the priest offers some prasad to Parvathy and she takes permission from Akhila first. Akhila tells her that she does not need anyone’s permission to seek blessings from God and asks her to accept the prasad. Parvathy smiles, looks at Adithya for a moment and accepts the prasad. Vanaja loses her cool seeing this and tells Akhila that if couples are meant to partake in the puja, Parvathy shouldn’t. The priest then tells her that other than women who are married yet separated from their husband, anyone can be a part of the puja. He leaves Vanaja fuming. To know what happens next, watch Sembaruthi that airs on Zee5 tonight.

For the unversed, Parvathy and Adithya get married to each other in a temple, owing to certain circumstances. They also know that Akhila is against their relationship so they decide to wait till she accepts their relationship for them to open up about their marriage.

[Photo] Shivani Narayanan Takes Off To Goa For A Beach-Y Week And We Cannot Keep Calm!