Find out what happened in tonight's episode of Sembaruthi here. 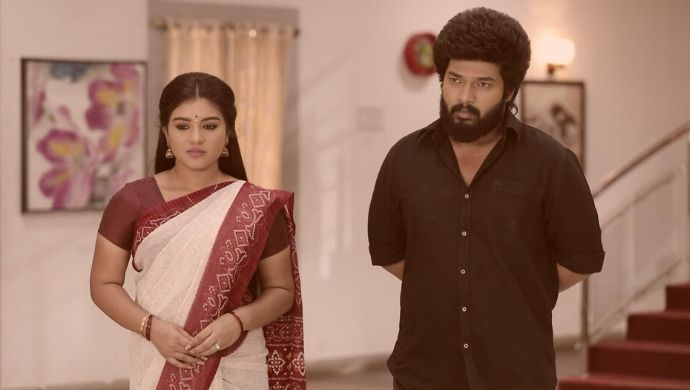 In the previous episode, Akhilandeshwari confronts Adithya about whether he visited her at the hospital or not when she was lying unconscious. Vanaja stands there looking at the drama excitedly hoping for it to get ugly. However, Adithya confesses to Akhila that he does have something to tell her but will only tell her the entire truth on his birthday. Akhila agrees to it, since he doesn’t leave any options for her. The episode ends with Guruji entering the house to perform a puja of the spadika-lingam.

The guruji tells the family that everyone who is married or about to be married must be a part of the puja, since that will ensure that they are with each other for the next seven births. Adithya and Parvathy exchange looks. Akhila asks Parvathy to make all the arrangements for the puja. Vanaja tells Mithra that she is pretty sure that Adithya will come up with a way to perform the puja with Parvathy. Before the puja, Parvathy and Adithya are talking to each other in his room about the puja.

She tells him that she wishes to perform the puja with him and he tells her that her wish is his command. Even as Adithya assures her that he has a plan in place to make sure that they perform the puja together, Vanaja tells Mithra that she needs to be more careful about everything that’s going on in the house. She tells her that they need to somehow make sure that it’s Mithra who performs the puja with Adithya and not Parvathy.

When the puja begins, Arun mocks Vanaja for standing aloof since her husband is away. She grudgingly decides to not react to his comments. After the puja, the priest offers the prasad to Parvathy, too, and just as she takes a step forward to take it, Vanaja stops her. She rudely asks Parvathy to not try and be a part of their family and that she can never attain that status. Parvathy is hurt by her words but the priest tells them that in the eyes of God, everyone is the same.

Parvathy seeks permission from Akhila before accepting it and Akhila tells her that she doesn’t need her permission to seek blessings from God. Every couple in the house then take turns to perform the paalabhishekam of the lingam. Vanaja asks Mithra to stay alert and perform it with Adi. Just then, the priest adds more ghee to the havan kund and the entire house is full of smoke. Parvathy and Adithya take advantage of the distraction and perform the puja together. Mithra steps forward but Aishwarya steps on her foot and stops her.

Later, Vanaja is upset that she was defeated and Mithra lies to Akhila that she performed the puja. The priest later on, tells everyone that they have to perform a puja after looking at the moon that will ensure that the couples stay together forever.

[Photo] Shivani Narayanan Takes Off To Goa For A Beach-Y Week And We Cannot Keep Calm!