Parvathy gets scolded by her father for being absent-minded. He warns her of dire consequences if she continues to think about Adithya. 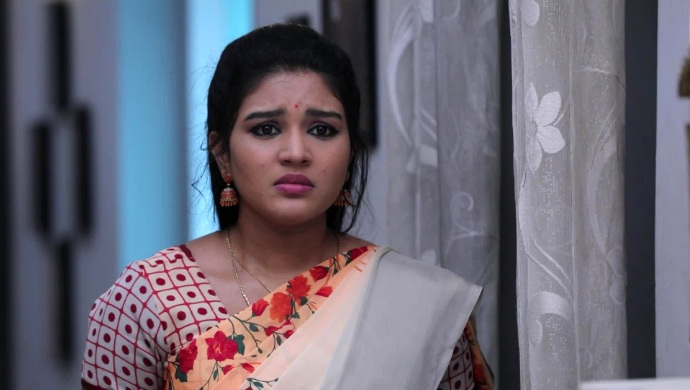 In today’s episode of Sembaruthi, Adithya and Parvathy bear the brunt of being bound by love for their respective parents. Adithya suppresses his feelings and pretends as if he is okay, in front of his mother, while Parvathy remains tight-lipped about her sorrow, even after knowing that her father has plans to get her married to someone else. And the root cause of all the problems, Vanaja has a hearty laugh.

Purushothaman feels sorry for Adithya and asks him not to lose hope. However, Adithya isn’t convinced by his assurances. He asks Purushothaman if his mother is delighted to know that Parvathy is no longer in the house. To show a mirror to Akhilandeshwari, Purushothaman pinches her inflated ego. He tells her that Sundaram didn’t give her a chance to throw him out of the house as he chose to leave with dignity. By saying so, he makes Akhilandeshwari feel guilty for behaving rudely with Sundaram and Parvathy.

Meanwhile, Adithya sits alone in the outhouse wondering why Parvathy left the city without even informing him. Arun comforts Adithya and tries to assure him that Parvathy will return sooner or later. Elsewhere, Parvathy gets scolded by her father for being absent-minded. He warns her of dire consequences if she continues to think about Adithya. He looks determined to get her married to someone else.

In Akhilandeshwari’s mansion, when the entire family sits to have breakfast, the boss lady unintentionally takes Parvathy’s name when Pattama serves food. Thus, she proves that Parvathy’s absence has affected her the most. Now, what will Adithya and Parvathy do to reunite? For more entertainment, watch Yaaradi Nee Mohini, on ZEE5.