Sembaruthi 7 January 2020 Written Update: Rishi Asks Parvathy Why She Doesn’t Like Him

Rishi is persistent on finding out why Parvathy doesn’t like him. As she tries to get away from him, he holds her hand! How will she react? 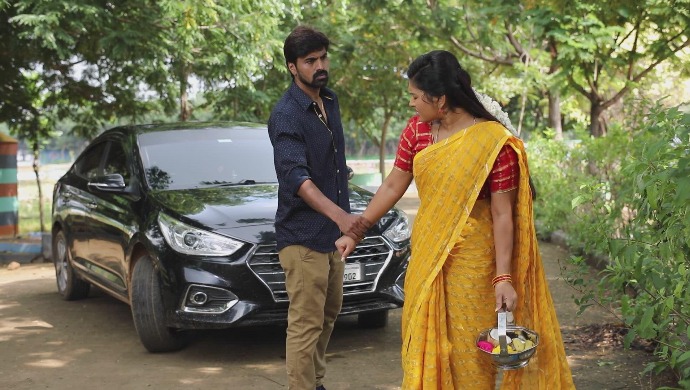 In the previous episode, Akhila finally learns about Adi and Parvathy’s affair. She is obviously not pleased to know that her son is in love with the household cook. Akhila cancels all the meetings for the rest of the day and heads home. On her way, she meets Nandini, who instills the idea of getting Adi married to Mithra instead of killing Parvathy and causing a messy scene. Akhila ponders over this thought and decides to get Adi married to Mithra on his birthday. Purushottam, Arun and Aishwarya are shocked to hear her announcement and try to reason with her. But Akhila is stubborn and wants to get Adi-Mithra and Parvathy-Rishi married on the same day.

Tonight, Vanaja expresses her happiness over Akhila’s decision to get Adi-Mithra and Parvathy-Rishi’s married on Adi’s birthday. Arun and Aishwarya are wondering what made Akhila come up with such a decision. They decide to figure out what brought Akhila to make such an announcement. Aishwarya goes to Parvathy and breaks the news to her. Parvathy is heartbroken to hear about this but wonders what could have brought about such a sudden development. She suspects that Akhila might have learnt about her and Adi’s marriage.

Aishwarya pacifies her and tells her to not worry much. Vanaja meets Nandini and tells her about Akhila’s announcement. Nandini is happy to hear this and they both rejoice in the news. However, Vanaja is still wondering about why Akhila decided to take up such a big step. To this, Nandini reveals that it’s because Akhila has found out about Adi and Parvathy’s love affair. She then reveals to Vanaja about her conversation with Akhila. Happy with how events are working out in their favour finally, Nandini and Vanaja celebrate.

Parvathy informs Adi about what’s happening in the house. She breaks down as she thinks about the consequences of Akhila’s decision. Adi pacifies her and tells her that he just has one meeting to attend, post which, he will return home to her. Parvathy is happy to hear this and tells him that she can’t wait for him to come back. Akhila sits in front of the temple in her house and prays to ensure that no problem arises on the day of Adi’s wedding.

Nandini meets Rishi and tells him to make Parvathy reveal the truth about her wedding with Adi. Just as ordered, Rishi meets Parvathy as she heads back home from the temple. He tries to sweet-talk with Parvathy as a means to torture her. Just as expected, Parvathy feels super uncomfortable when he asks her to go see a movie with him. She declines his offer but he is persistent. Rishi asks her why she doesn’t like him. Parvathy refuses to answer and walks away when he holds her hand.

Watch Appani Sarath In His Award Winning Role As A Serial Killer In Auto Shankar!