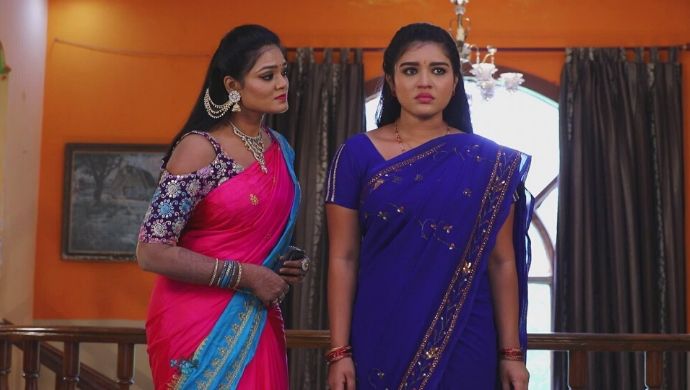 In the previous episode, Parvathy and Adithya fooled everyone and performed the paalabhishek at the Spadika lingam puja. Vanaja and Mithra tried their best to foil their attempts but are left disappointed as Adithya and gang is way ahead of them. The episode ends with Guruji saying that they will now have to do the Chandra darshan puja with their spouses which will make sure that they are with each other for the next seven births. Parvathy and Adithya exchange looks and smile at each other.

In the upcoming episode, Mithra sees Parvathy tensed and taunts her. She tells her that Adithya will only do the Chandra darshan puja with her and no one else. Parvathy loses her cool and scolds Mithra. She threatens to break her teeth, too. Mithra challenges Parvathy to do the puja with Adi because she is going to make sure that Akhila is around and Akhila won’t let that happen. Will Adithya and Parvathy successfully do the Chandra darshan puja, too? Or will Mithra expose them in front of Akhila? How will the two manage this one? To know more, watch Sembaruthi that goes on air on Zee5 tonight.

For the ones who missed the last couple of episodes, Adithya and Parvathy are in love with each other. Akhilandeshwari is against their relationship because Parvathy is a cook and mainly, her employee. However, Adi and Parvathy get married to each other secretly.