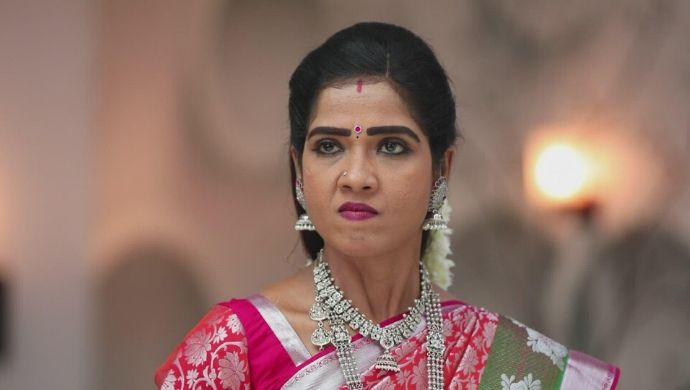 In the previous episode, Parvathy and Adithya performed the puja together by causing a distraction so Akhilandeshwari doesn’t see them. Vanaja and Mithra are disappointed that they could not stop it. The Guruji then says that all couples need to prepare for the Chandra darshan puja. Vanaja and Mithra decide to ruin that for Parvathy and Adithya. Akhila explains the importance of the puja and how it will make sure that you are always happy with your spouse.

Akhila decided to hold the Chandra darshan puja at the cottage so they can catch a better glimpse of the moon from over there. She asks Parvathy to make all the necessary arrangements. Parvathy is busy making all the arrangements even as Vanaja is figuring out how to stall her and stop her from coming with them.

She gives Parvathy a bunch of tasks to do and Parvathy obliges. Purushothaman and Arun enter the living room and figure that Vanaja has given her extra work. They try to talk her out of it but Vanaja sticks to her excuses. Just then, Adithya enters and tells her that he knows what she is up to and no one can stop Parvathy. He asks her to come along.

At the cottage, the Guruji applies Kumkum on three betel leaves and tells everyone that the husband or fiancé must apply the Kumkum on his spouse’s forehead. Parvathy is upset wondering how Adithya will make this happen when Mithra walks in. She taunts her and challenges her. She tells her that if Adithya applies the Kumkum on her forehead, Parvathy will have to pack her bags and leave town. Parvathy accepts the challenge and tells her that if she (Mithra) fails, she will have to leave the house immediately.

Adithya walks in and scolds Parvathy for talking to irrelevant people and takes her to his room. A fuming Mithra reminds Adithya of what might happen if Akhila catches them and Adi tells her that they will figure out what to do then. He locks the room later on and tells Parvathy that if they can’t catch the moon from the roof, they might as well do the puja from the room. This leaves Parvathy relieved and happy.