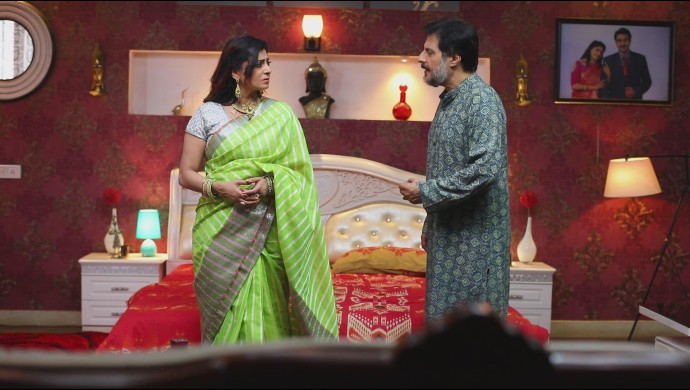 Tonight’s episode of Sembaruthi opens with Adithya eagerly awaiting his father’s return from the wedding. As per their plan, Purushothaman was supposed to reveal the truth to Akhilandeshwari at the right moment about Adithya’s marriage to Parvathy. Instead, a worried Purushothaman narrates the story of Akhilandeshwari storming off from a family wedding where the groom had married a girl who was not of the same wealth status as the Adhikadavur family. Purushothaman also added that this perhaps is not a good time to tell Akhilandeshwari the truth and suggested postponing the plan. Scroll down to read about what happened in the latest episode.

In the meantime, Adithya decides to take photos of his wife, Parvathy in the garden and asks her to go dress up. He even ropes in a disgruntled Mithra to hold the thermocol reflector while he takes pictures of Parvathy. Spotting them in the garden, Vanaja rushes back to bring Akhilandeshwari to the garden, hoping that she would see the two of them together.

However, Aishwarya sees her and tells her husband Arun to do something about it. The two of them rush to Akhilandeshwari’s room to head Vanaja off even as Vanaja has persuaded Akhilandeshwari to come with her to the garden. Will Arun and Aishwarya succeed in buying some more time for Adithya and Parvathy? For updates on this family drama, keep watching Sembaruthi on ZEE5.

For those who may have missed the last few episodes, here’s what you should know. After Parvathy saves Akhilandeshwari from an attack by goons sent by Nandini, the lady undergoes a transformation. She and Parvathy develop a bond and she even starts behaving pleasantly to everybody. Surprised, Adithya and Parvathy think that perhaps the time has come to tell Akhilandeshwari about Adithya’s secret marriage to Parvathy and the circumstances that brought it about. If you like such family dramas, then don’t forget to check out Nachiyarpuram, a story of two lovers played by real life couple, Dinesh Gopalsamy and Rachitha Mahalakshmi.